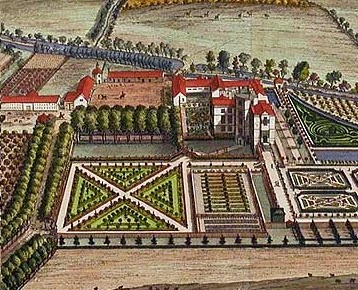 ... was much nearer the Holy (Holly) Brook with Coley Farm attached. The second House (1790s) on the same site was to a different design. 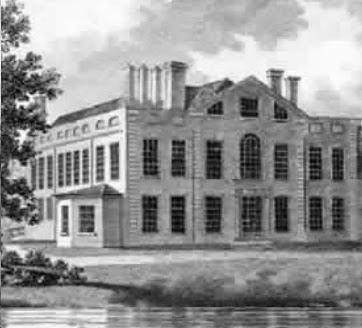 It is thought that some of the materials from No 2 were used to build the No 3 (and present) pile further north and away from the often-flooding river. 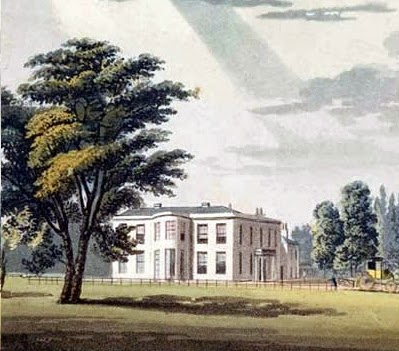 Three early 20th century developments on the estate are worthy of note. 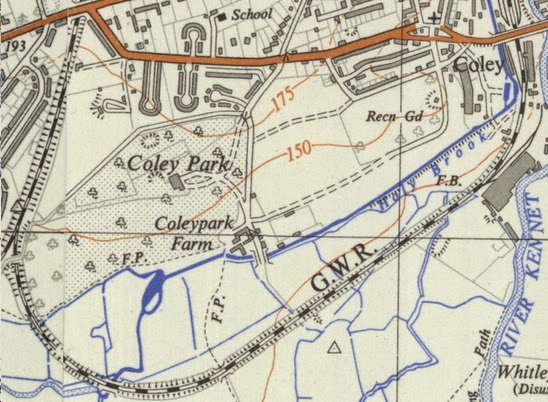 The Great Western Railway built a branch from Southcote Junction (where the line via Newbury leaves the Basingstone branch) to the Reading Goods Station. 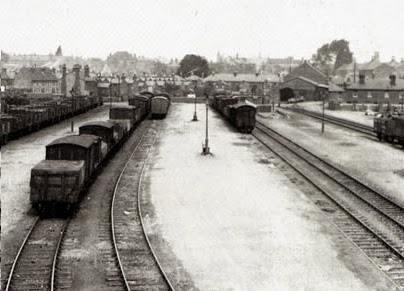 Also, to the right centre of the map above (the grey block) was the Co-operative Wholesale Society jam factory. 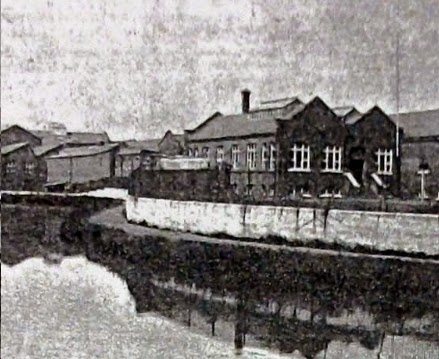 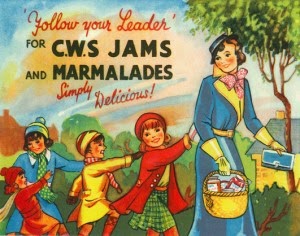 In the field south of the factory was a small WW1 airstrip whose claim to fame is being where W E Johns, creator of flying ace Biggles, learned to fly. And one more claim to fame for the area. The "recreation ground" (map above) was an early home of Reading Football Club.

But in the late 1950s much of the land was bought by Reading Council to develop the present housing estate with its distinctive three tower blocks ... 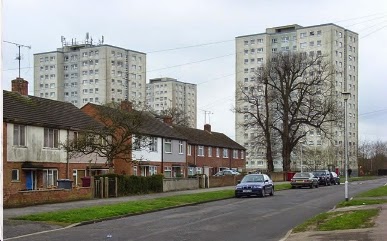 ... once the tallest buildings in Reading. Oh, yes; and Kate Winslet went to school in Coley Park. 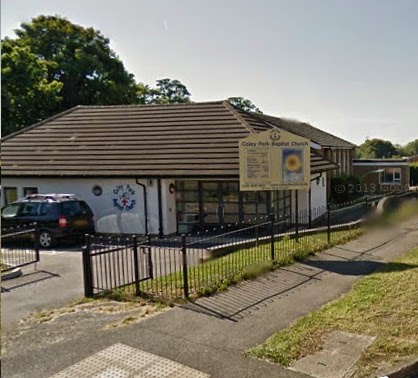 But it was to Coley Park Baptist Church than the fbbs travelled for the big day. And that meant a ride on a Reading Buses bus.

Once upon a time, not that long ago, out of town buses used a bus station just off Station Hill and underneath Mecca Bingo. 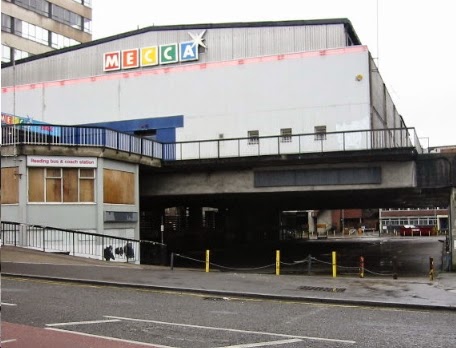 Neither is now in use. Station Hill itself was one of the main terminal points for local buses.

But with the massive redevelopment of the railway station, everything now uses on street stands splattered liberally around the town centre. The excellently situated Station Hill "interchange" is to be an "attractive pedestrian piazza, surrounded my "a major commercial redevelopment". Now there's a surprise. A useful and convenient bus station sold off to make way for office blocks.

The struggling visitor is helped somewhat by a "Where to Catch Your Bus" street map in every stand. 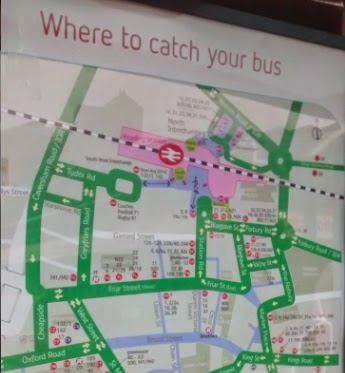 It was easy to find the stand for the bus to Coley Park at stop FM on Friar Street. 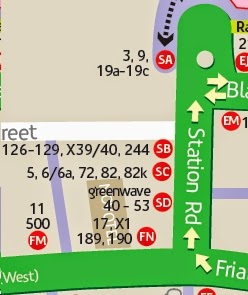 The centre map would have been better had it been correct and/or up-to-date. For example services 19A etc were stopping at stop FM not as shown. And what is service 190; or, to put it another way, where would I catch First Bus service 90 to Bracknell? Of course there are confuser-driven screens in most stops, but when fbb wanted to check his bus to Coley Park it was obvious ... 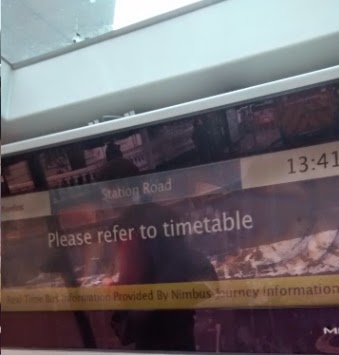 Time for a quick lunch. But where? Nandos was packed solid, as was almost every other branded noshery in Reading centre. But what is this? 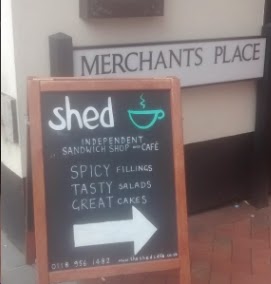 Right next to the Coley Park departure stand a rather seedy back lane led to "The Shed". 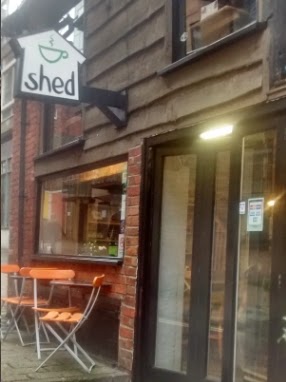 Sumptuous sarnies made to order, a potta and a bag of crisps made a delectable repast for the fbbs. And the little caff makes its own cakes! 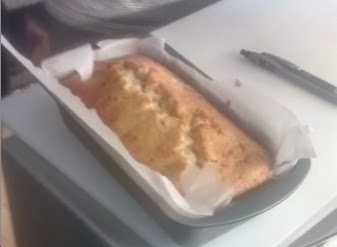 But this is a public transport blog, not Giles Coren's foody column in the Saturday Times magazine. So while Mrs fbb explored Poundland, your sated blogger spent a happy few minutes watching the buses go by.

------------------------------------------
Advent
Calendar
16
John Ch 3
Those of us who, in days of our youth, attended Sunday School or Bible class, may well remember an activity called "sword drill". With Bible held fully shut, the leader would announce Book, Chapter and Verse and the first to stand up and read out the correct sentences would win a point, a toffee or the accolade of his peers. We all reckoned that John Chapter 3 verse 16 was likely to be one of the questions. 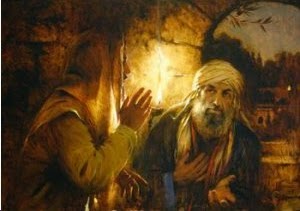 In his Gospel, John records the arrival, by night (i.e. secretly) of a member of the Jewish ruling council (The Samhedrin). Nicodemus wanted to know what this "new" religion was all about.

Jesus answered, “I am telling you the truth: no one can see the Kingdom of God without being born again.”

A cleaning out of the old (sinful) Nicodemus was the only way, both for this life and for eternity.

"As Moses lifted up the bronze snake on a pole in the desert, in the same way the Son of Man (aka Jesus) must be lifted up (crucified), so that everyone who believes in him may have eternal life."

Moses, pole? About 1200 years previously, as Moses was leading the people across the desert and into the Promised Land, they were beset by poisonous snakes.

The antidote was to "look up" to a snake lifted high on a pole and thus be cured. Even today a version of this is the symbol of the Medical Profession!

Jesus had come to be the ultimate equivalent of the snake. The antidote to the poison of disobedience to God.

"For God loved the world so much that he gave his only Son, so that everyone who believes in him may not die but have eternal life." (John Chapter 3 verses 16)

Without this message, we will never "get" Christmas.