Basingstoke It Is, My Dear [2] 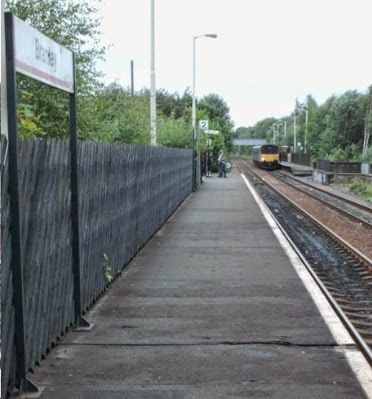 The original station was opened by the Leeds, Bradford and Halifax Junction Railway on 1 August 1854. This was closed by British Railways on 4 July 1966; the last trains having called on 2 July. The station had platforms opposite each other and were connected by a footbridge. The present station off Stanningley Road opened on 12 September 1983. 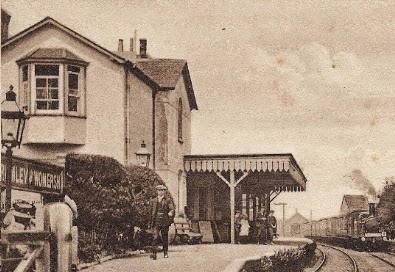 Opened in 1865 as "Bramley", its name was changed in June 1888 to "Bramley & Wonersh" as the station, although situated in Bramley, was only a short distance from Wonersh. It was on the now closed Guildford to Cranleigh line. 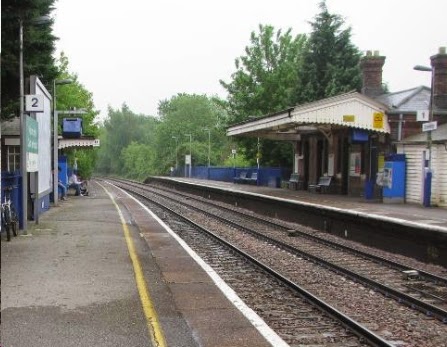 The station is served by First Great Western Basingstoke to Reading local services. The station is 5 miles (8 km) north of Basingstoke. The line opened in 1848 but Bramley station did not open until 1895.

But this third Bramley is not of outstanding interest, architecturally or otherwise; but it is what lay to the south of the station that was worth looking at. Here is a 1930s map. 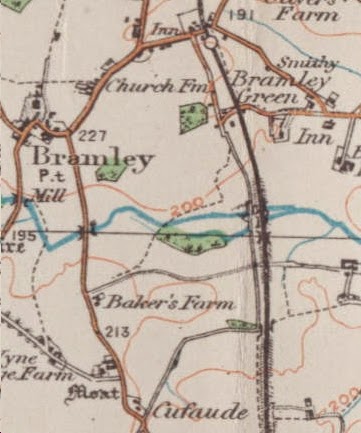 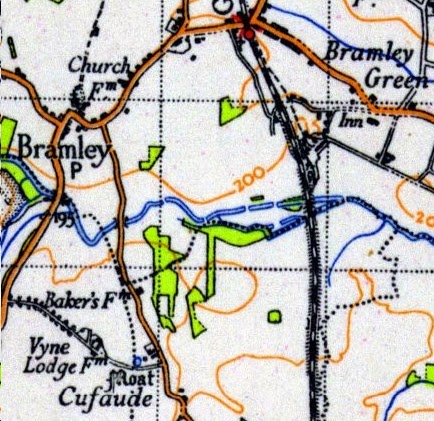 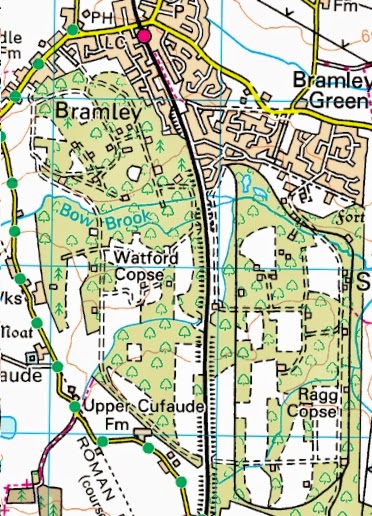 The Ordnance Survey has been telling porky pies. Because in 1917:-

Bramley Ordnance Depot, later known as Bramley Central Ammunition Depot, opened on the large areas of scrub land in north Hampshire, during World War I for the manufacture and storage of ammunition. To enable both safe manufacture and storage of munitions, well spaced railway tracks were built both sides of the Great Western Railway line connecting Basingstoke and Reading. The tracks were connected with each other at their northern and southern ends, and the tracks on either side of the running line were connected with each other by means of two tunnels under the GWR running lines. (Actually, bridges : fbb) 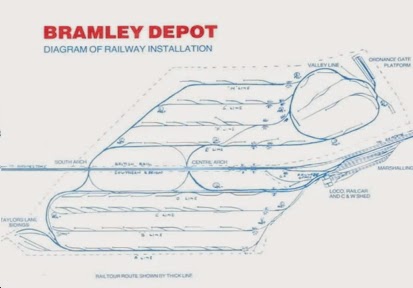 North is to the right
Bramley station is just off the map, centre right.

The railways on the site were permanently closed in 1987 and all track was soon lifted. The area is now used for training but a aerial view shows plenty of remnants ... 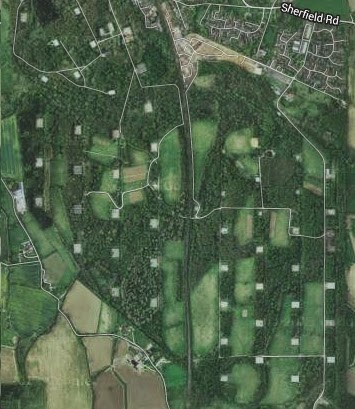 ... including the bridges under the former GWR tracks. 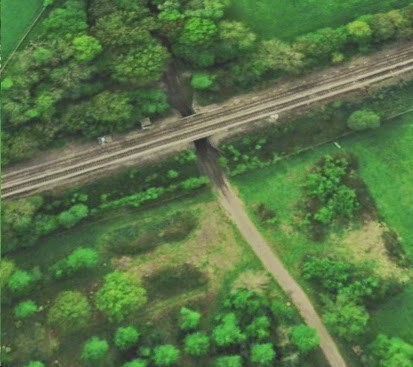 In the final year, a railtour was organised from Basingstoke. 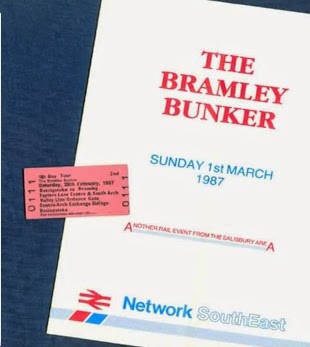 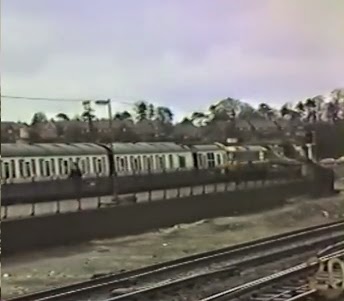 ... then operated under their own power on a tour of the camp's main circuits. On those non PC, non Health and Safety days, Network Southeast thought nothing of allowing their passengers to leap from the carriages to explore parts of the network, as here at ... 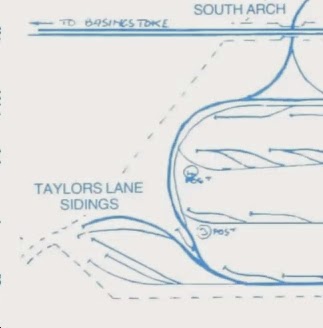 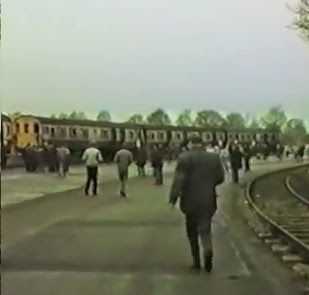 Apparently one of the three car units got stuck on a tight curve and had to back up and "take a run at it"! You could just imagine the lawyers rushing to their compensation claims if such a trip were to be provided today.

Alas it cannot be because all that is left on the site is a few pill boxes; this at Taylors Gate and visible from a public footpath. 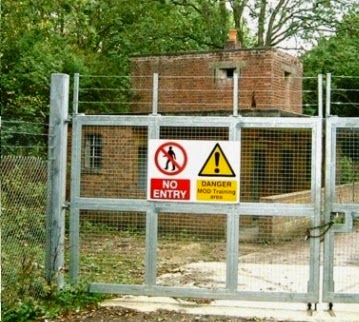 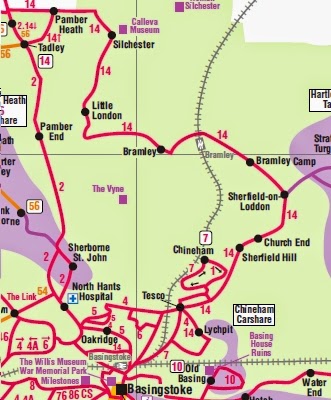 ... has a stop just past the new Chineham development roundabout at Gaiger Avenue which gives access to the footpath as mentioned above. 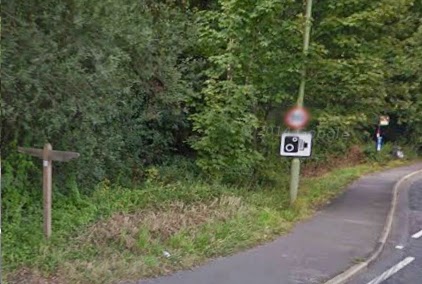 Taylors Gate is in the woods on the left. But there is no access to the site as it is still in military use. Buses every hour! 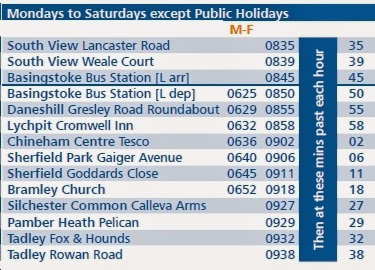 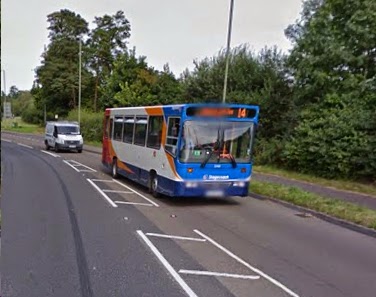 Which leaves one last station.

It was in 1906 that Reading West opened. Unlike Bramley and Mortimer, this station is huge. 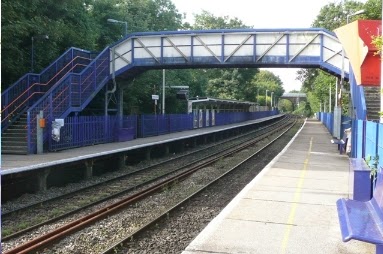 Why? Well now; in the early 1900s trains started running between the south coast and the midlands. But it was a pain in the coupling to reverse at Reading. The clever solution was to build a station, about a mile from the centre of the town on the Oxford Road. 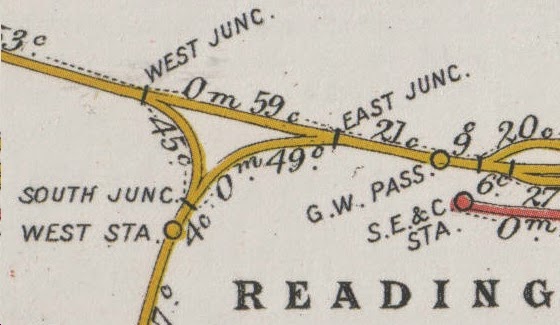 Trains could simply hang a left and avoid the time penalty of the reverse at the main station. Initially it seemed a good idea, but the loss of interchange facilities meant that it was little used for its original purpose. In modern times such services do reverse; and with CrossCountry's Voyagers it is, of course, easy peasy.

From 1936 to 1968, you could hop off your train at Reading West and catch a trolleybus into town. 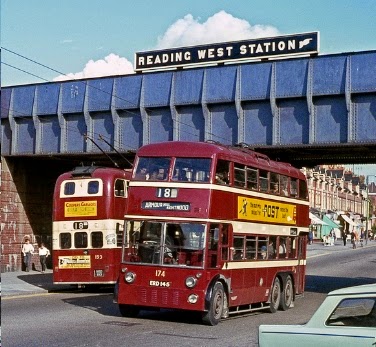 Now that was special!

P.S. There is a fourth Bramley in South Yorkshire but it does not have a railway station. It lies between Rotherham and Maltby just off the A631. 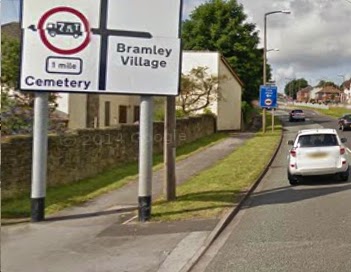 From February 2015, First will begin operating new services which will link St Columb Major and St Agnes with both Truro and Newquay. 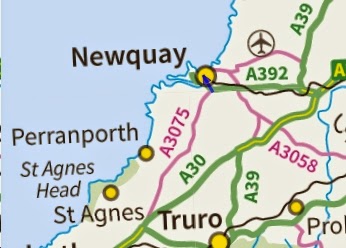 St Columb Major is at the junction of the A39 and A392. First withdrew its route 85 between Truro and St Agnes in 2013. These services will further expand competition against he ailing Western Greyhound. Or will it be replacement? 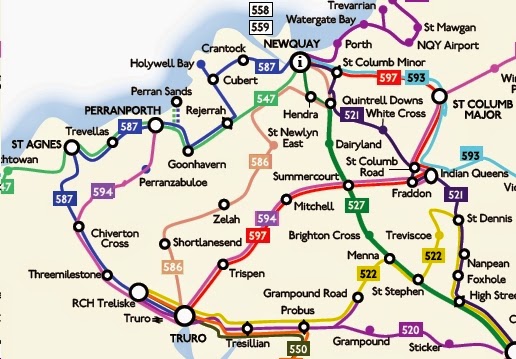 The Old Testament of the Bible has a complicated history; but the early documents were assiduously copied and preserved by official Scribes. Early traditions were carefully reviewed and brought together with respect and reverence by editorial experts. 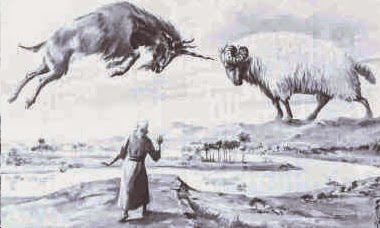 An angel said to me, “Mortal man, understand the meaning. The vision has to do with the end of the world. When the end of the present four kingdoms (goat) is near and they have become so wicked that they must be punished, there will be a stubborn, vicious, and deceitful king (ram). He will grow strong; but not by his own power. He will cause terrible destruction and be successful in everything he does. He will bring destruction on powerful men and on God's own people. Because he is cunning, he will succeed in his deceitful ways. He will be proud of himself and destroy many people without warning. He will even defy the greatest King of all.”

However weird and incomprehensible the visions and however grim the political future, all these writings, taken together, predicted something dramatic in the world order.

And so the New Testament starts with Christmas.