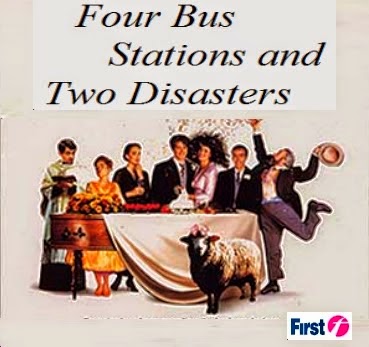 This was Lemon Quay in Truro ... 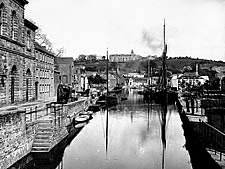 ... and this is today's filled in version. 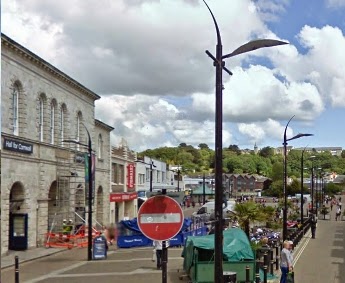 The stone building on the left fixes the location. About 50 yards past the edifice and just off on the left is Truro's bus station. Only it isn't. It's First's bus station and abandon hope any other operator who might wish to enter. Western Greyhound and the long-standing independent, Hopleys, leave from nearby-ish streets. 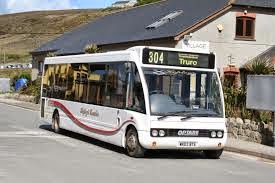 First's facility is adequate, although passengers' queueing room is a bit cramped; with two lines of sawtooth bays on each side of a central block ... 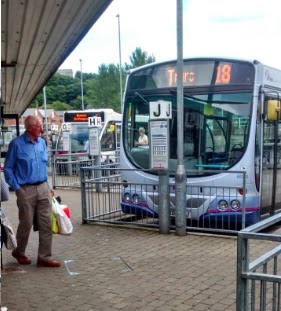 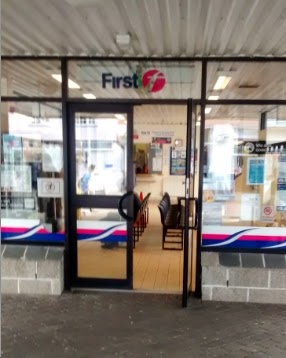 Needless to say, there are no timetables on display anywhere; plenty of booklets, but with acres of glass one might expect to be able to check a timetable when the office etc. is closed. And bus enthusiasts are not allowed to endanger themselves ... 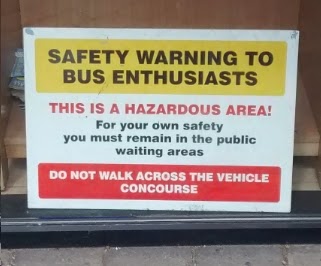 ... whilst "ordinary" passengers may be crushed to death with far less warning!

fbb's chosen route was the 88 to Falmouth. The inevitable departure list was decidedly unhelpful as half the journeys follow a different route into Falmouth to link the two University campi. Of this subtlety, the lists remained sadly oblivious. 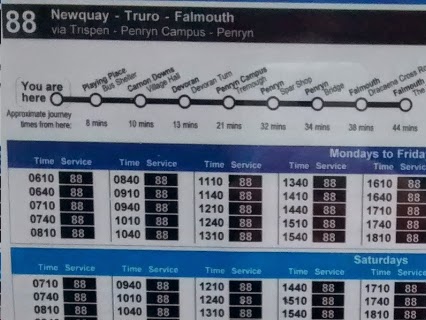 Nevertheless, fbb's chosen steed did indeed run via the Penryn Campus and Wood Lane at Falmouth, as per the timetable book ... 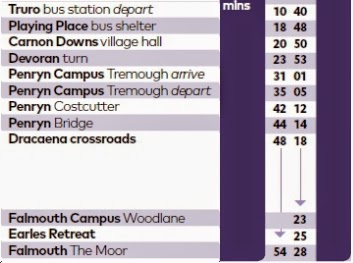 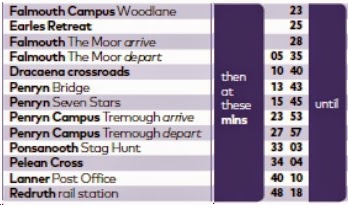 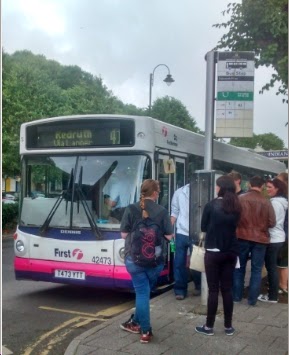 So we arrive at "bus station" No. 4, it's Falmouth Moor and it's very poor! It offers just two parallel lines of shelters and nothing else. The only way of telling which bus leaves from which shelter is to wander around and peer at the various information panels. Don't bother looking at the bus stop flags as they are either wrong or illegible. 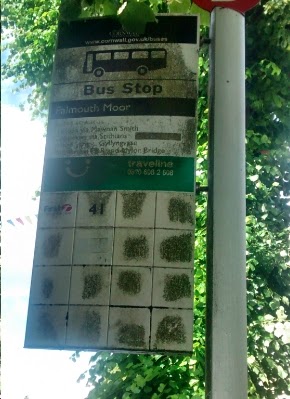 The only route number shown above was the 41 - which doesn't stop there. DISGRACEFUL (again!). Needless to say, there is no obvious source of timetable books and no guidance anywhere on the shelters as to where they might be obtained. Depressing in the extreme.

But more was to come. fbb's next journey was to Helston, the pretty way. The route and its ramifications requires its own separate blog; so watch our for "Where the Hell is Helford?" with passing apologies for (necessary?) asperity, as we will see.

But the plan, after a delizioso pasto italiano at Prezzo ... 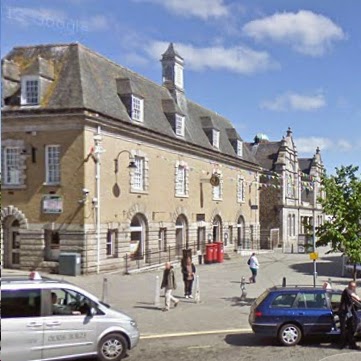 ... in the old Post Office [Spaghetti and meat balls and a delicious cheesecake] was to catch service 35 and ...

... change to service 2 from Helston to Penzance.

Unhelpfully, arrival at Helston was 1911 and departure 2018. 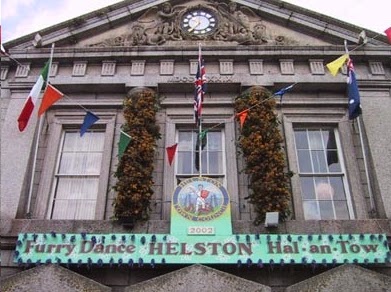 fbb is sure that Helston is a wonderful place, but, bar waiting for the Furry Dance [incorrectly sung as "Floral Fance" by Terry Wogan], there ain't a lot to do for just over an hour on an overcast rain-threatening evening. A short adjournment to enjoy the richness and variety of local Cornish banter at the pub ... 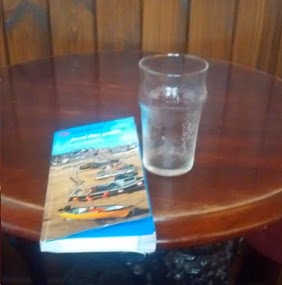 ... where fbb was the only human present. There was a monosyllabic barmaid as bored as fbb! Spinning out half a pint of lager for over an hour proved impossible to achieve but, referring to his First Kernow timetable book, fbb spotted that the 2018 departure arrived in Coinagehall Street at 2001 before doing a little circuit to include Tesco and Sainsburys (Sainsburys bottom right). 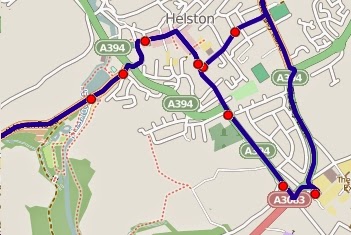 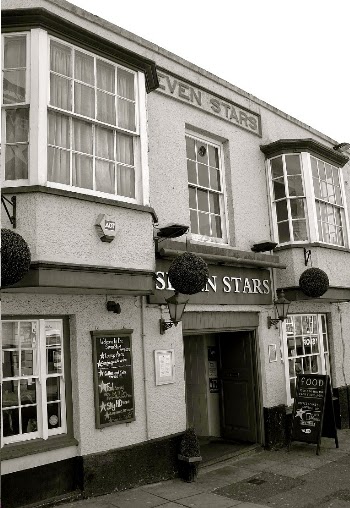 At 2035, and becoming cold and miserable, fbb took a taxi. At £30, a tad more expensive than the bus fare on his OAP pass! fbb has yet to find out what happened. If anyone from First Kernow is still reading these blogs, the date was Friday 27th June. Explanations gratefully received.


Undoubtedly disaster No. 2
with route number 2 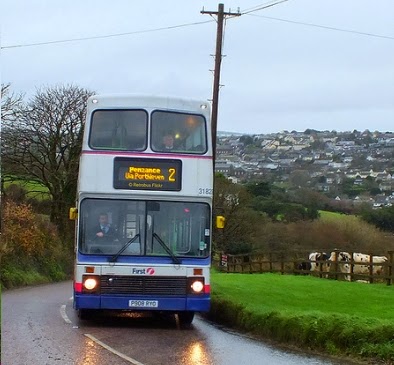 There was no apology or explanation for the (apparent) withdrawal of a whole service last Thursday.

... and illustrating the silliness of facebook-speak. The other, simply unhelpful.

And this is the non-operating timetable (click on it to enlarge):-

We have seen Webberbus lose the contract for Taunton Park and Ride and, similarly, lose a tender in the Weston-super-Mud area. But did they really cancel a whole service last Thursday? Presumably the competition, much maligned First Bus, was running OK? (click on timetable to enlarge):- 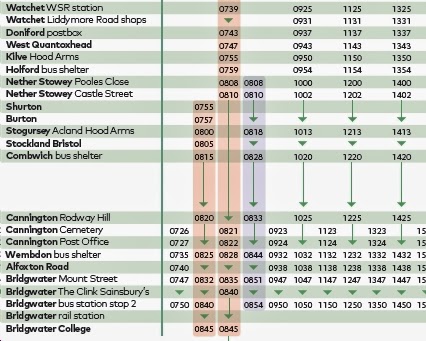 Here's a nice piccy of a bus to Cannington. 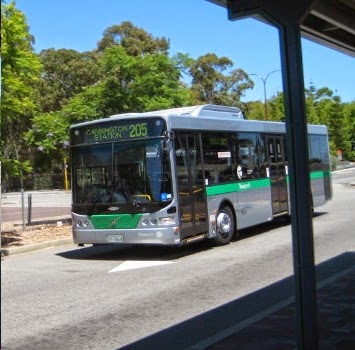