... and asks, "Which vehicle will still be carrying passengers by the end of September??


First delivered to Northampton Corporation Transport in 1947, this Daimler CVG 6 worked on the local bus routes covering 620,790 miles within the town boundary until it was withdrawn from service in 1964. It was then converted and used as a driver training vehicle during the period 1965-1969. 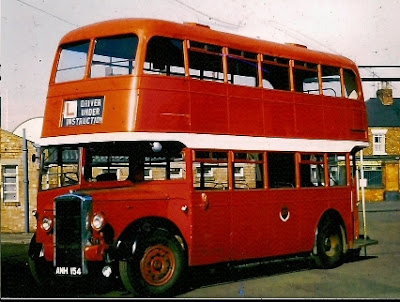 After this, 154 saw little use and was eventually de-licensed in 1973. With the advent of the Greyfriars Bus Station in the mid-seventies however, 154 was given a further lease of life as a promotional vehicle to distribute information about this new town facility. 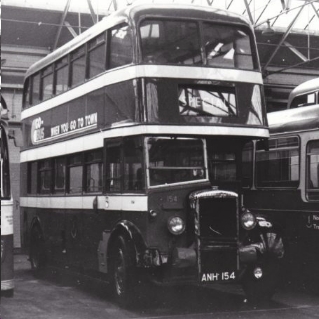 After this task was over in 1978, the vehicle was simply stored in a shed at the back of the St James bus depot. Gone perhaps, but certainly not forgotten.

The 154 Preservation Society was formed in 1990 and, since then, has spent over £10,000 restoring this wonderful vehicle.  Having subsequently purchased a 1968 example of the same type of vehicle ... ... (JVV 267G), this is now operational after the fitting of a replacement engine.

On her many outings during the dry summer months, vintage 154 has travelled as far as Halifax in Yorkshire and has now completed a grand total of over 650,000 miles.

The other bus in the top photo is a living (but perhaps not much longer) testimony to the decline of Northampton Corporation Transport. It was delivered new to NCT and looked magnificent in the town's gorgeous crimson livery. 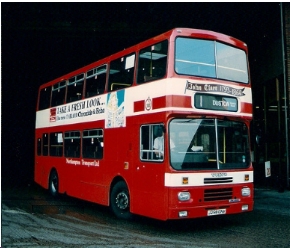 Carrying fleet number 98, labelled with its "arms length" Northampton  Transport Ltd" fleet name and registered J298 GNV it was delivered in 1991 and, for its day, was a very smart top-of-the-range Volvo Citybus. The bus bore the name of John Clare. 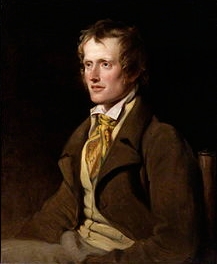 John Clare (13 July 1793 to 20 May 1864) was an English poet, the son of a farm labourer, who came to be known for his celebratory representations of the English countryside and his lamentation of its disruption. His poetry underwent a major re-evaluation in the late 20th century and he is often now considered to be among the most important 19th-century poets.

Clare was constantly torn between the two worlds of literary London and his often illiterate neighbours; between the need to write poetry and the need for money to feed and clothe his children. His health began to suffer, and he had bouts of severe depression, which became worse after his sixth child was born in 1830 and as his poetry sold less well.

Depression eventually led to his retreat to an Asylum from 1837 to 1841. He absconded but was re-committed to Northampton Lunatic Asylum where he died in 1864. Whilst there he wrote what was arguably his best poem entitled "I am" ...


I am: yet what I am none cares or knows,
My friends forsake me like a memory lost;
I am the self-consumer of my woes,
They rise and vanish in oblivious host,
Like shades in love and death's oblivion lost;
And yet I am! and live with shadows tost

Into the nothingness of scorn and noise,
Into the living sea of waking dreams,
Where there is neither sense of life nor joys,
But the vast shipwreck of my life's esteems;
And e'en the dearest--that I loved the best--
Are strange--nay, rather stranger than the rest.

I long for scenes where man has never trod;
A place where woman never smil'd or wept;
There to abide with my creator, God,
And sleep as I in childhood sweetly slept:
Untroubling and untroubled where I lie;
The grass below--above the vaulted sky.

In view of his mental state, that is one cracker of a poem!

Back to the buses!

NCT was bought by Grampian (Aberdeen Corporation as was) and the crimson disappeared in favour of a Grampain clone livery in cream and maroon with only  passing a hint of NCT's past lusciousness. 98 kept its name but gained a little thistle! 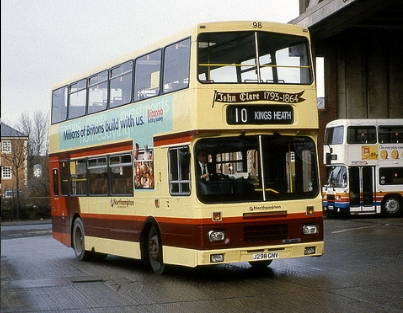 But when Grampian merged with Badgerline to form FirstBus, everything went corporate and John Clare was expunged as was any memory of the bus's civic heritage. It was adorned with First's fade-out pink (yuk!) ... 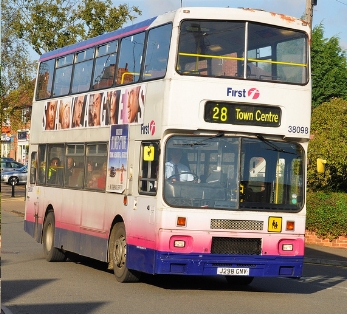 ... and carried this scheme until the very end. Our man on the spot tells fbb that the bus was running school services on Friday 13th September (an appropriate date!) just a tad over 24 hours from the company's last bussy breath.

So, back to the original teaser., "Which vehicle will still be carrying passengers by the end of September?" Sunday 29th September : Trip to Olney Market Town. The outward journey will be via the picturesque Newport Pagnell Road, returning via the Bedford Road, passing by the impressive facade of Castle Ashby House which is the seat of the Marquess of Northampton. N.B. Trips only open to members of the 154 Society. 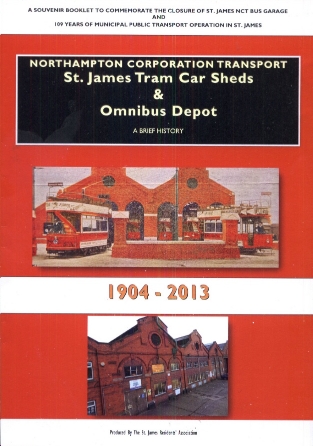 It commemorates the life and times of the St James depot from tram days to its demise last Saturday evening; a real nostalgiafest with tear-jerking destination displays on the back cover. 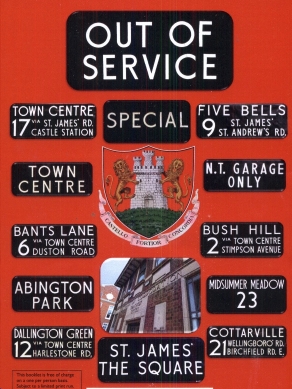 OUT OF SERVICE  : too true! The book was distributed to members free of charge but copies at £5 can be ordered from
stjamesra@phonecoop.coop

The association web site has a slide show of the depot "at the end" here.
http://sjra.info/insidestamesbusgarage.html

Next Bus Blog : Saturday 21st September
Posted by fatbusbloke at 02:00