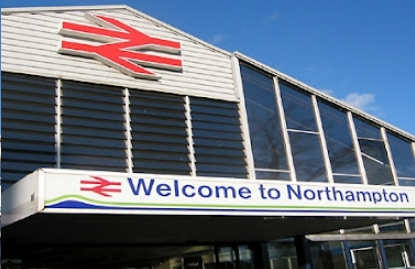 ... at Northampton station (see here with past and obvious [!] branding for "Silverlink"). 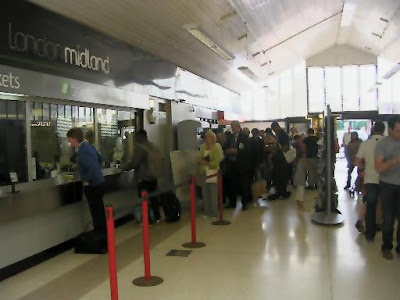 The Mayor opened a shiny new travel centre in 1980 which was promptly closed under the auspices of "GoVia", the current franchisee. So, upon arrival from afar, the hopeful passenger has no source of infromation for onward travel except a couple of posters, often obscured by happy passengers enjoying the experience of waiting to prise the product (a ticket) out of the under-staffed sales windows. Ticket sales might be a tad quicker if the staff did not have to answer a plethora of enquiries as well. So a travel centre might be a good idea; it's a wonder nobody has ever though of it. 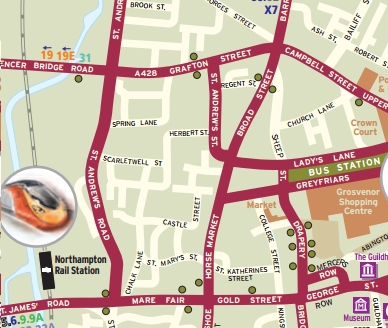 The county council's offering includes an enlargement of the town centre but it is not at all easy to gather that all buses from the little green dot go to the bus station. The council doesn't seem to know (a) that there are (almost) no pendolino trains calling at Northampton and (b) the station building shown was replaced in the late 1960s in a different position. But, according to Alan, our Northampton hack, the accompanying route map is reasonably accurate.
Then we come to the "official" Onward Travel poster. 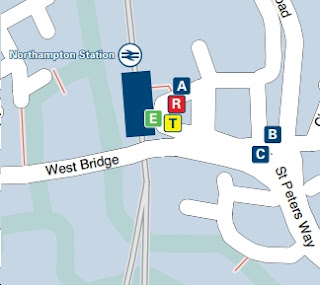 A  is the anonymous and largely useless stop referred to in a previous blog. See "Onward Travel : A Northampton Journey [3] (read again).
B  and  C  are the main stops on the unnamed Black Lion Hill but reasonably obvious if you look around outside the station area.
E  is the station exit. Sadly the cartographer is showing the pre-1960s station building presumably following the lead of the Council as above. The building simply isn't there any more, thus effectively disorientating anyone who might like to try and decipher the map.
R  is for rail replacement buses, which you might think should be obviously pointed out by helpful station staff, should they be required.
T  is for taxis, inevitably closer to the exit and more visible than nasty big buses.
An unlavish and theoretical prize is to be awarded by fbb for the blog reader who can successfully match the above map's road network to reality. 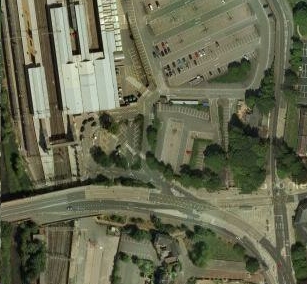 In particular that road striking off due north just above stop C. Here it is in practice. 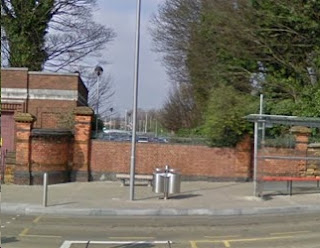 The "crunch" question is whether satnav might send you that way. (Groan)

Also of interest is this footpath ... 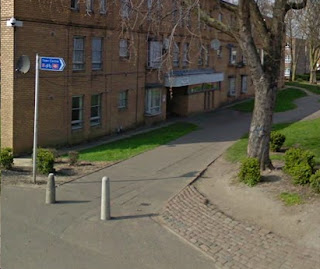 ... which, according to National Rail, is the main road from the station to the north west, assuming that is the purpose of the yellow colouring! 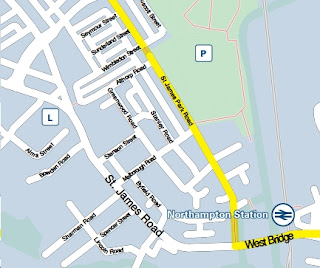 "P" is a park; the green colour is a bit of a clue. "L" is a Library, useful if you think you might have a long time to wait for your train?

Confidence is beginning to ebb. Then there is the mysterious stop D ... 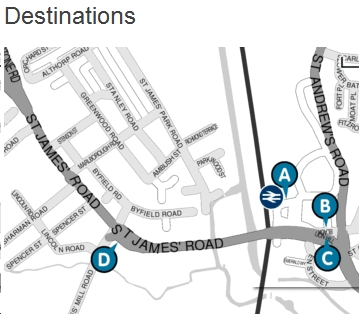 ... on a plan which conveniently doesn't admit to the most important destination of all, namely the town centre. Stop D is here ... 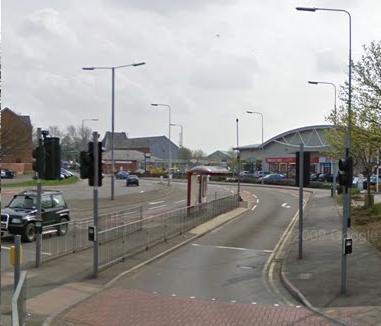 ... at the end of St James Mill Road. The services list at the station shows that only route 22 calls there.

... and all of them stop at the "official" station stop "C" anyway so why would you want to toddle along the road in the first place? Once again it might be better if these posters were created by someone with a brain and, even better, someone who has visited Northampton to check the facts.

But, let's be positive. Let's assume that you have made the great leap of faith and you are approaching stops B and C to partake of Onward Travel to the bus station. Let's also assume that you have worked out which way to point your weary body in order to go to the town centre.

With these rash assumptions made, there is good news ... maybe! There is information about the times of buses at the stop and there is an electronic "next bus departure" display. So we are, as they say, "cooking with gas". More tomorrow as we conclude this look at the benefits of modern technology at Northampton.

And there's news about the bus station replacement as well.