Meeting up with an Old Friend 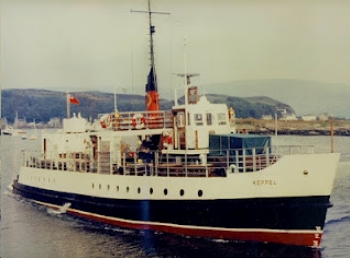 fbb first visited Largs (on the Ayrshire coast of the Firth of Clyde, almost west of Glasgow and down a bit as the flow cries) over 40 years ago when he was "courting" the future Mrs fbb. 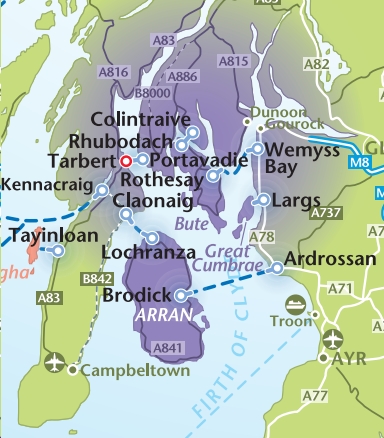 One fascination of a stay c/o the future Mrs' family home, in Bearsden, Glasgow, were the services of ferries operated by Caledonian Macbrayne [Cal-Mac]. The map above is from the present network; but back in the early 1970s the routes were similar. Over the 40 or so years of his blissfully happy marriage (really, honest!), fbb has kept a passing eye on service developments and made occasional trips "overseas".
The history of Cal-Mac is too complex for this blog but, in very simple terms, private steamer operators were taken over by the private railway companies and, after various mergers and groupings, became state owned when the railways were nationalised in 1947.  The present structure was put in place in 1973 when the remaining two (nationalised) companies, merged to form Cal-Mac. Caledonian had operated in the Firth of Clyde whist MacBrayne plied the more northerly waters. So, since 1947, all these ferry services have been state owned and heavily subsidised. In 1956 the first Clyde car ferry service started between Gourock and Dunoon and, over the intervening years, the business has become totally dominated by motor traffic. Remaining passenger-only services from Fairlie (between Largs and Ardrossan) ended before fbb came on the scene, followed soon by the passenger-only boat (M V Keppel, illustrated above) between Largs and Millport on the Isle of Cumbrae.

But changes were afoot (or, perhaps, afloat!)

In a huge shock to the status quo, it was in June 1973 that a brand new commercial ferry service started from McInroys Point west of Gourock to Hunters Quay north of Dunoon in direct competition with Cal-Mac.

It uses "basic" RO-RO [roll on roll off] double ended vessels and was aimed unashamedly at car and commercial vehicle traffic. 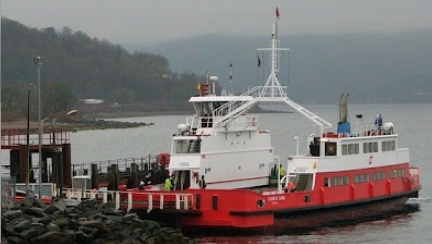 The business has grown over the years and a 20 minute frequency now operates, enhanced to every 15 minutes on Friday afternoons and Saturday mornings. 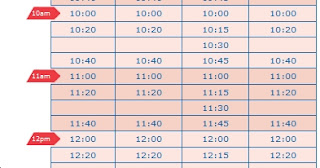 Although local buses were initially extended for foot passenger use, most non-car business remained with Cal-Mac. The "local" bus service on the "mainland"** side is now the long distance 900 series operated by McGill between Glasgow and Largs or Dunoon.
Cal-Mac have been coy about the effect of competition on its big boat service, but when, under (silly?) EEC law the whole job lot was opened up to competitive tender, the Gourock to Dunoon big boat service was excluded. Presumably Brussels bureaucrats balk at boosting a subsidised route when there is a commercial alternative. Needless to say, Cal-Mac won the initial six-year block tender from 2006 (who else could possibly tender for it?) and continued to run from Gourock on a temporary basis.

After a period of trauma, when it looked as if the passenger facility from town to town would disappear completely, a new company, Argyll Ferries, started a passenger-only route in 2011. It offers about 60 sailings daily Monday to Saturday and 30 on Sundays, considerably more frequent that the old "big boats". 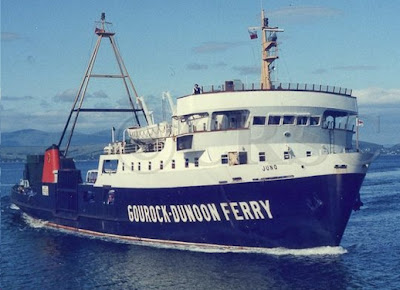 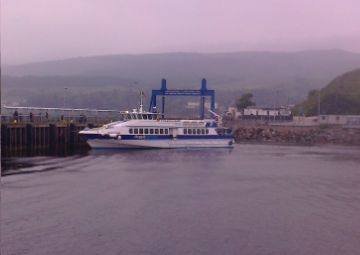 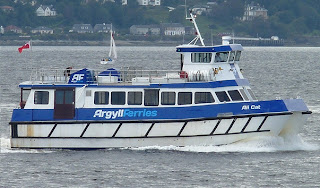 Service reliability is not as good as that provided by the older "real" ships with trips cancelled when the weather is rough. "Disgusted of Dunoon" is a regular correspondent spitting venom via the local press. 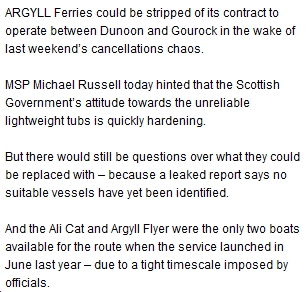 recent local press report
"Ali Cat" is a concatenation of the title "Alison's Catamaran" and she (Alison) is the grown-up daughter of Mark and Jenny Rayment whose "Solent and Wight Line Cruises" has plied the waters of the Solent, offering a variety of boat trips to Island visitors and those to Portsmouth as seen here:-

Ali Cat (then owned by the Rayments)
on a Portsmouth Harbour cruise.
Over the years fbb has been a very satisfied customer of the Rayments, both as an indiviual and an organiser of excursions for dozens and hundreds. The "Ali Cat" was first leased to Cal-Mac to cover for non availability of big boats during pier reconstruction and later sold to Argyll Ferries.

So, very much a meeting up with an old friend for fbb! 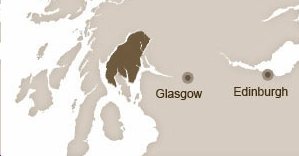 ** "Mainland". OK, fbb knows that Dunoon is also on the "mainland", it is not on an island. It is situated towards the southernmost tip of the Cowal Peninsula (in black, above), one of the bits of western Scotland that point southwards with a long way round road link to Strathclyde.

And in case you didn't know, Argyll Ferries is a wholly owned subsidiary of ... 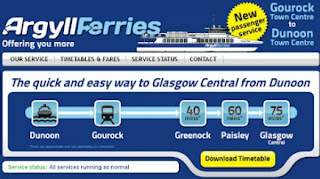 Such is the silliness of the EEC enforced tendering system. 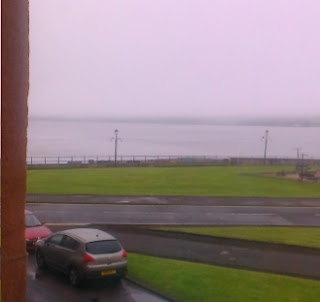