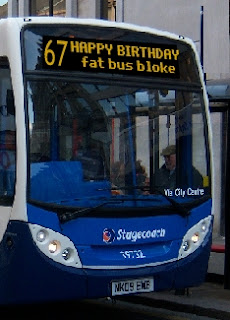 Sadly not that; although a display of familial felicitations for the big day (just over week ago) displayed on a dedicated bus would have been spiffing. Equally, Mrs fbb did not spring from a huge cake in the shape of a Volvo Neopolitan, dressed alluringly in a skimpy conductress' costume. That would have been revolting unachievable nice! (?)
A few minutes after fbb was spending his "birthday money" in the excellent second-hand bookshop in Post Office Lane, Wantage ... 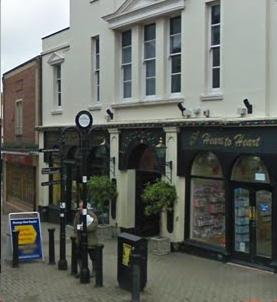 ... No. 3 son was in the same place foraging for something suitable. For the record, fbb did not get any birthday money, so blew a small hole in that week's housekeeping budget. One of the boy's chosen books was, however, ... 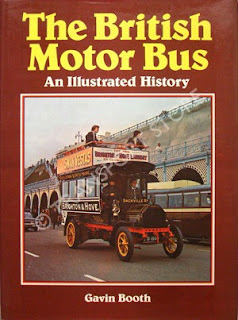 ... a 1977 edition of Gavin Booth's book. The title has been refreshed and reprinted many times since but copies of the above edition are currently available on Amazon for 1p plus postage. So get spending!
Although it is a very general overview of the subject and not a an academic or historical tome, it does contain many "good things"; one of which is this:- 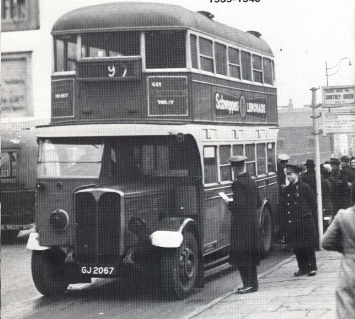 It is a London Transport ST bus loading passengers in Castlegate, Sheffield, prior to setting off northwards to Southey Green. Although the picture is monochrome, the bus was wearing its traditional London red and white and running with its wartime white patches and obscured headlights.
Many books refer to the months after the London Blitz (1941) when provincial cities sent "spare" vehicles to help out in the Metropolis. 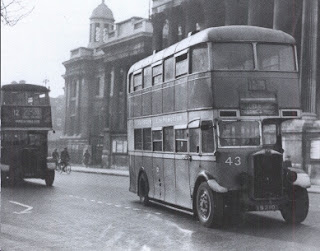 This one, trundling past St Paul's Cathedral, is from Glasgow Corporation. But much less is written about buses "going the other way" in 1942; from London to badly bombed cities further north and west. The "returned compliment" warrants only a passing paragraph in the excellent book ... 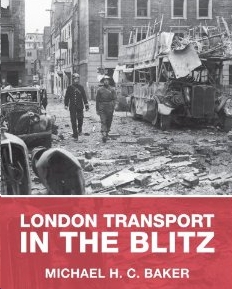 ... still available on-line but priced at somewhat more than 1p!
For the record, the service 97 still leaves from Castlegate ... 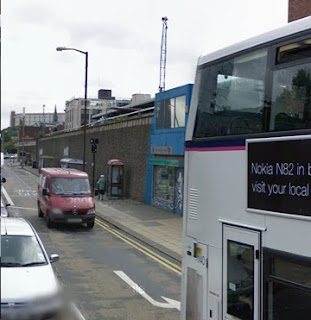 ... and still runs to Southey Green, with a brace being snapped here on Norwood Road. 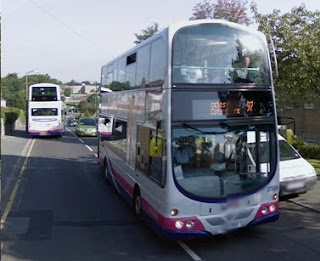 The route now extends further north from Southey to Ecclesfield and the long-standing section south of the City to Nether Edge was de-linked some years ago. The 97 (and its sister 97A) now run via the Abbeydale Road to Totley and Totley Brook.
So why was its a Birthday Surprise?
fbb is something of a "geek" when it comes to Transport in Sheffield and the old bloke must confess that in all his reading and research he has never seen reference to, or pictures of, STs in that glorious City of Steel.
Just for the record, we had better gaze upon, and drool over, a contemperaneous picture of an ST in glorious colour. 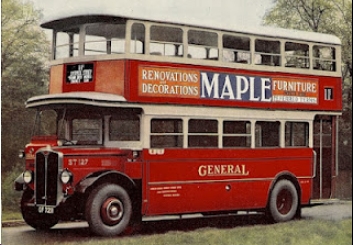 But there is a spooky tailpiece. The definitive on-line reference work on the STs is "Ian's Bus Stop" (view here). But his history of ST6027 ... 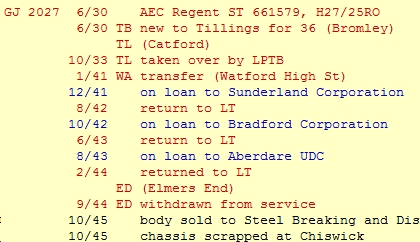 ... does not record a visit to Sheffield!

A mystery still to be solved .... ? Unless über-geek Ian is wrong? Surely not?

Mystery solved, clanger dropped, fbb gets is wrong yet again.

Too many "6s"  and "2s". Thanks to those who have quickly commented, and apologies to Ian for even thinking of doubting him. Another hour or so on the naughty step.
Next Blog : due Tuesday March 13th
Yet another anniversary
Posted by fatbusbloke at 02:31