Not Rushing to Flushing [4]

========================================
But first ...
STOP PRESS
FIRSTGROUP ANNOUNCES
£77.7M INVESTMENT
IN 385 NEW BUSES
The new vehicles, which feature a mixture of double deckers, single deckers, and midis, will all come fitted with leather seats, CCTV and Wi-Fi providing customers with free internet access. In addition to the dedicated space for wheelchair users, FirstGroup will also provide extra space for pushchairs and trial the installation of USB charging points on some vehicles.

Of the 385 vehicle order, more than 90% (355) of the new buses will be fitted with Euro 6 engines, the biggest investment (£73m) in Euro 6 buses in the UK to date. Test results show that running eight Euro 6 buses produces the same amount of certain exhaust emissions, including Oxides of Nitrogen (NOx) and Particulate Matter (PM), as running one bus with a Euro 5 engine. With the majority of its businesses across the UK set to benefit from the introduction of Euro 6 buses, there will be a positive impact on air quality in town and city centres. 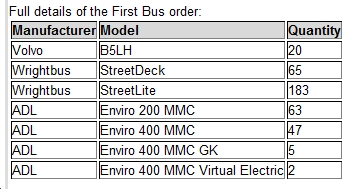 Hope that all makes sense! 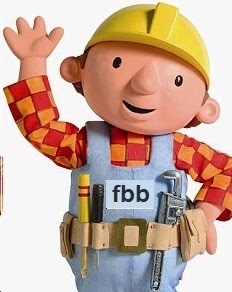 Yes we can! Despite his faux pas (plural) on he 56 timetable, fbb believes that services 69 and 69A can be presented in a more user-friendly way; a way which might encourage extra usage. But we need to be aware that there is a fifth "market" for which these services are intended.


Some bus operators have been brave enough to remove school journeys from their timetables, but, for others, the revenue and tender money are too important to lose. Here on the befuddling 69 and 69A, school variations impinge and complicate what would otherwise be a relative;y simple schedule.

Here are the school journeys and their Saturday and non schoolday alternatives separated out from the presentation in First Kernow's latest network book. 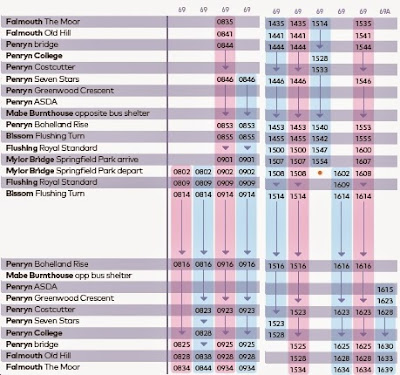 Of thee 19 journeys on the table, 10 require explanation and modification because of schools. That is too many for clarity and comprehensibility.

So here goes with an fbb alternative presentation. 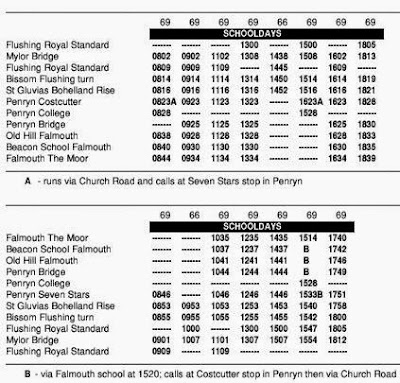 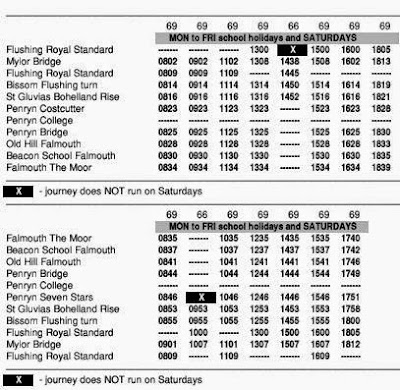 In the timetable book these tables would sit alongside one another on a standard ⅓ A4 page but would be much better on A5.

69A : Old Hill and Mabe Burnthouse

Here we show all buses via Old Hill and the four buses to Green Lane, ASDA and Mabe. 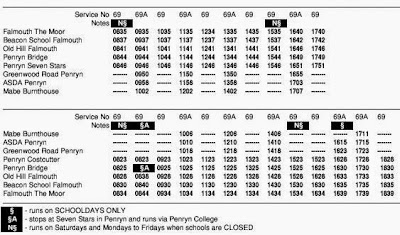 Although there is still schools "clutter" it is less complex than the one mega table sliding arrow-replete over two pages.

Again this would sit on a standard page with room for the service 66 journeys as well. 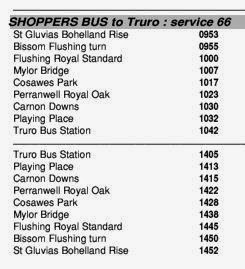 So we are using one LESS page that the current booklet; which needs two for the combined jobby and one extra for service 66. Bonus.

It might make things clearer for the passenger if service 69A were given a separate number; the differences a really too great to make the use of a simple suffix "A" appropriate.

It is also appropriate to record that timetable mistakes can be also implemented by those who create the table in the first place. 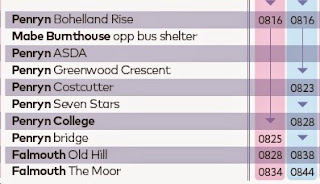 The 0816 from Penryn (pink shading for non-schooldays) calls at Penryn Costcutter at 0823 and the schoolday variant (blue) stops on the opposite side of the road at  Seven Stars, also at 0823. Both columns are wrong in the printed and on-line version.

So it's not only fbb that gets it wrong! 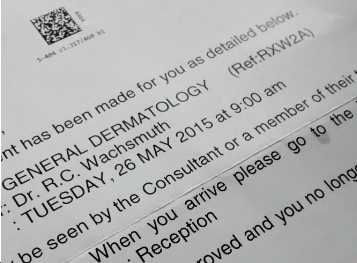 ... on Thursday 28th May! fbb had attended two days previously.

The potential problem turned out be of no consequence. The scabby thing on fbb's temple turned out to be a harmless sebaceous hyperplasia; or, in English, a scabby thing! It is, said the doc, age related; a polite way of saying, "fbb you are old, what do you expect?"