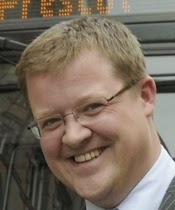 Mike Watson is MD of Stagecoach South West based in Exeter. A little over  week ago, and unconnected with the TravelWatch SouthWest shindig, Mr Watson had invited fbb to a "meet" for lunch. Inappropriately, fbb travelled from Seaton and Back by First Bus X53!

Michael Watson began his career in 1996 in the Service Planning department at London Transport Buses. After five years in Planning and Procurement roles, Michael moved to Go Ahead subsidiary Metrobus as Assistant Operations Manager. He has also worked for Go North East, as well as in consultancy roles and, before joining Stagecoach, he spent five years with Arriva, as General Manager of the St Helens depot and then as an Area Manager in Yorkshire. Michael joined Stagecoach North East as Operations Director in November 2011.

He doesn't look old enough to have done all that; it's not just policemen that look younger. 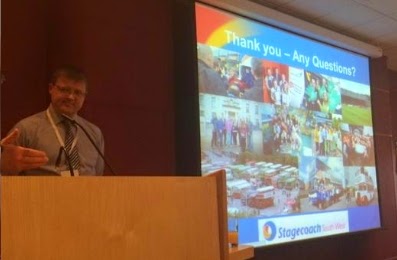 His talk for TWSW was split into two chunks. Firstly came an impassioned plea on behalf of the bus as a powerful tool in meeting the economic objectives of the region.

The Stagecoach bus network currently moves about 30 million passengers around the region each year. This facilitates significant economic activity. The contribution of the bus to the Strategic Economic Plan needs to be recognised.

He went on to outline some statistics supporting his contention that the bus is far more important than it politically realised. Three "success stories" were then highlighted. The patronage growth in the first year of 61% was astounding ...

... perhaps less so when you remember that it was at the expense of an ailing First Bus operation where the management simply threw in the oily towel. An agreed sale to Stagecoach foundered when the Competition Pirhanas threatened to intervene. But modest growth continues. 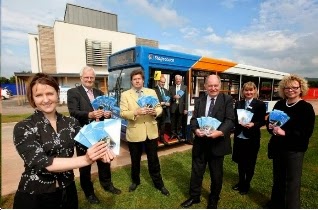 fbb might just challenge the "infrequent" services tag. There was a bus every hour along the main road ... 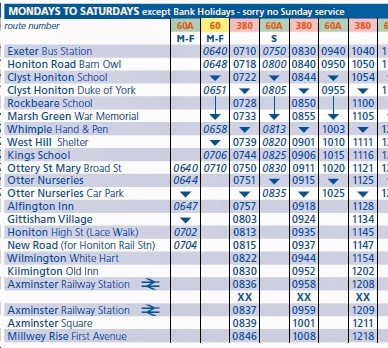 ... but nothing to Cranbrook as such; but Cranbrook was originally empty fields. Stagecoach 4 and 4A every 30 minutes (replacing 60, 60A and 380) have now gained an hourly Sunday service but only as far as the new town itself (map, left).

It will be interesting to see how the stats perform when the new Railway Station opens.

To create more choice in how you choose to travel, a new train station is to be built within Cranbrook. Travel by train provides a fast, reliable and frequent alternative to the motorcar whether travelling for business or leisure.The train station is anticipated to be opening in late 2014 early 2015.

It is, of course, running late. 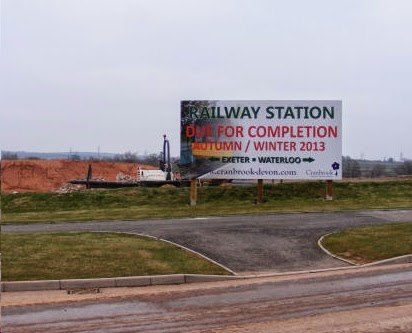 The extension of the Exeter (inner) Dayrider and Megarider bus zones (grey on the map) to include Cranbrook has brought bargain travel for regular passengers. £3.60 for a day should beat Rail; £12 a week even more so! 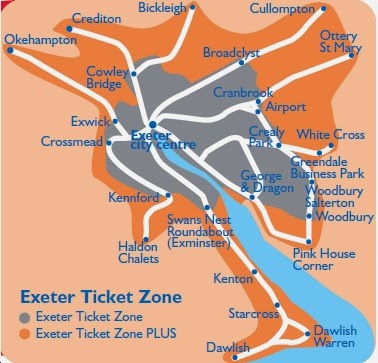 The third example is, of course, the unnumbered "Gold" route between Torquay and Plymouth. 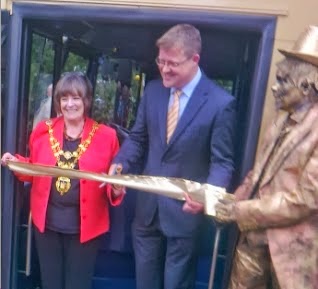 fbb went to the launch which was a superb event, complete with Gold biscuits! 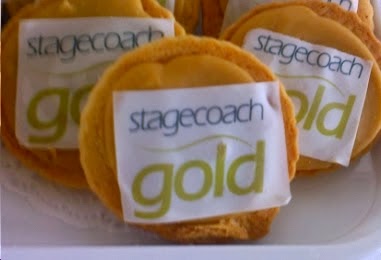 With edible labels. Significant growth figures were vaunted at the TWSW meeting, with just a passing mention of "another operator" (First) who withdrew. 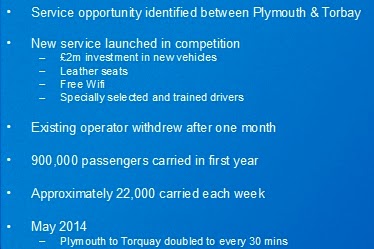 Nevertheless, doubling the frequency between Totnes and Plymouth (not Torquay and Plymouth as claimed, that always was half hourly!) is pretty impressive especially in view of the poor performance of that "other operator".

Passing mention was also made of the Take Five group of services ... 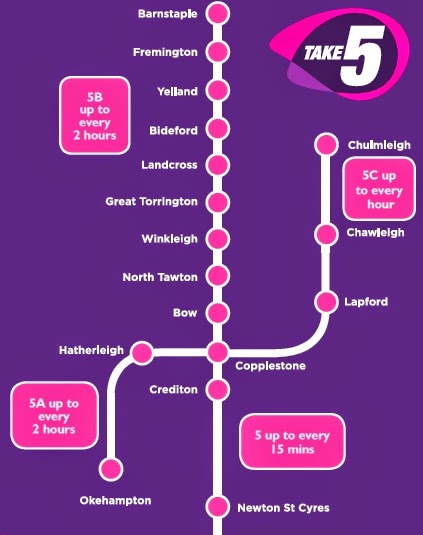 ... which turned a mess of routes into a sensible network.

Route 5 replaces services 50, 51, 315 and 377, combining them to give you one, easy to remember route number, a fantastic frequency of up to every 15 minutes between Exeter and Crediton and regular connections to Copplestone, Hatherleigh, Okehampton, Chulmleigh, Winkleigh and Barnstaple.

The "new" route 6 and 6A to Launceston and Bude was also outlined and these routes will from the basis of an fbb blog in a week or so.

Casting a blind eye over the very Stagecoach-positive gloss on some of the statistics, fbb can confirm that Mike Watson made his point very well indeed. Partnership and Good Planning will deliver a good service, attract more passengers and encourage trade in the towns.

Were the politicians listening?

Hello? Is anyone there?