Airfix was founded in 1939 by a Hungarian businessman Nicholas Kove, initially manufacturing rubber inflatable toys. In 1947, Airfix introduced injection moulding, initially producing pocket combs. In 1949, the company was commissioned to create a promotional model of a Ferguson TE20 tractor. 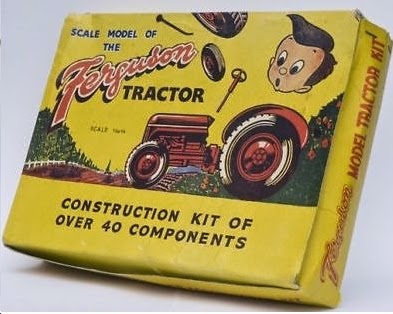 The model was initially moulded in cellulose acetate plastic and hand assembled for distribution to Ferguson sales representatives. To increase sales and lower production costs, the model was sold in kit form by Woolworth's stores.

The first aircraft kit was produced in 1955. Most sad old men of fbb's generation will remember the excitement of making their first Airfix kit. Although we were advised to paint all the parts before assembly, we never did. Using a little tube of glue (which stuck to everything, especially clothing much to mothers' disgust) we hurried to join the two halves of the fuselage together, add the wings and tail plus other unimportant bits like pilot, propellor and landing wheels. Then the not very well finished kit was attached to the ceiling with drawing pin and thread, only to fall out onto the floor without warning, knocking delicate bits off the model. These delicate bits would immediately evaporate, never to be seen again. 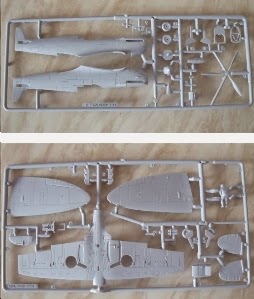 Although fbb had become interested in model railways, he just had to make a Spitfire - and did!

But it was the railway models that were the answer to a maiden's schoolboy's prayer. For a modest 2/- (two shillings or 10p; some as much as three shillings) you could equip your railway with realistic scenery at pocket money prices. 2/- inflated to today's prices would be £2; today's spitfire, for example, costs £7.99. OUCH!

In the late 80s, Hornby Railways (formerly Triang) started selling kits. fbb picked this one up at his local model shop for £5. fbb thought this was expensive for very old stock, possibly of poor quality; but he was wrong on both counts. On-line prices ranged from £9.50 to £15. OUCH! Produced on the continent, this was originally advertised as a GWR signal box. The flatter pitched roof looks very french! 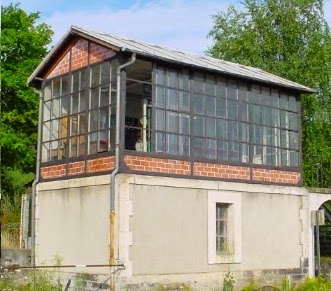 But the kit most definitely wasn't GWR. 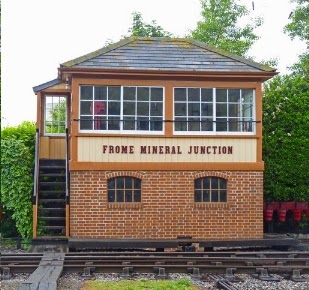 Neither was it an Airfix kit. 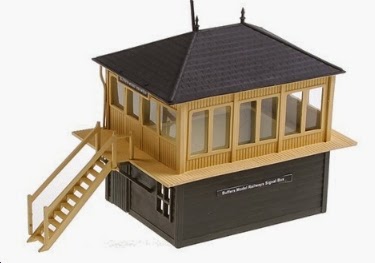 And it was too big for fbb's tiny little back-yard layout. His quarry-based preservation railway model would never have needed such a huge construction. So try "kit bashing"!

Out comes the hacksaw, glue and paint and we reduce the Hornby kit by one third. 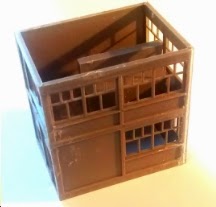 Most kits are hard to paint. Getting good joins between the colours of framing and weatherboarded panels is very hard, especially for an old codger whose hands are not as steady as they were. But not for this Hornby kit, no longer in production.

First paint the framing; splash it on! 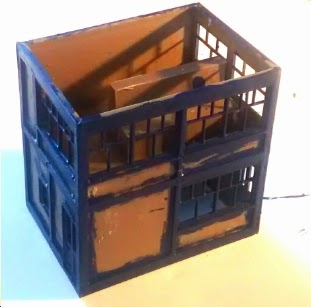 Then paint the boards, which are separate mouldings. 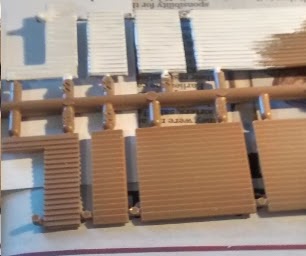 Glue the mouldings into their allocated slots and you have a reasonably clean and tidy signal box. 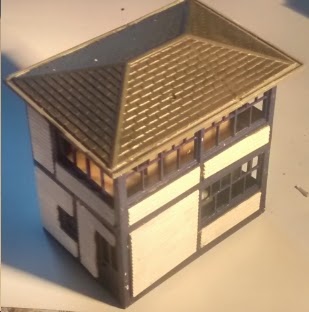 With a little bit of touching-up here and there, fbb has the basis of a very tidy little model. The kit is not finished and has been assembled temporarily for the photo. If you have good eyesight you can just see the join where the chopped up roof has been reglued.

Signal boxes are disappearing from the real railway, with enthusiasts weeping over their loss. Each former railway company had different designs which contributed to the distinctiveness of old-style privatised railway travel long after nationalisation.

This from Notwork Rail a year ago.

The new state-of-the-art rail operating centre is one of 12 which will eventually control large parts of the railway across Sussex and Surrey, replacing more than 800 signal boxes and other operational locations currently used to control trains. The new rail operating centre is part of a transformation of the railway in Three Bridges which will see it firmly placed on the national railway map for many decades to come. Eventually it will control all of the railway from London Victoria and London Bridge stations, along the length of the Brighton main line to Brighton and the south coast, and large areas either side in both Sussex and Surrey. 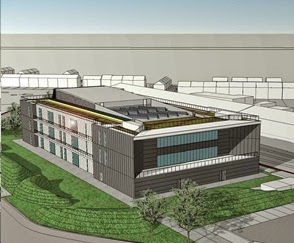 Efficient, maybe, but 21st century signal boxes lack the character and personality of the old way of doing things. And you can't sit on a wall  near the "box"  at Three Bridges and listen to the bell codes, thus predicting to other less experienced "spotters" what the next train will be. Enjoy those that are left!

Just remembered. After a tortuous corporate history, Airfix is now owned by Hornby.


Next bus blog : Monday 2nd February
Posted by fatbusbloke at 02:00