So where are the bus stops and what do they tell us?

One is right outside the Tourist Information Office, as you can see. 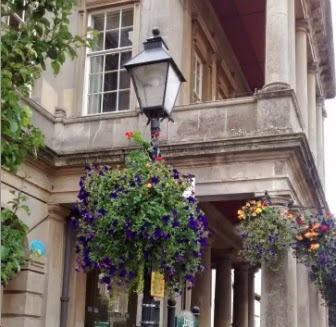 But there is a timetable frame to help us. 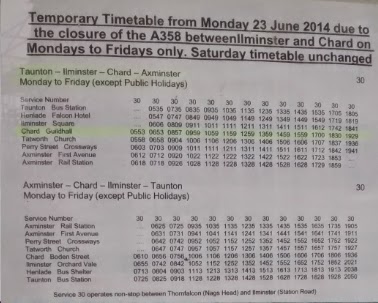 The timetable is for service 30 (both directions) and shows times for a diverted service because of a road closure. As it happens, the closure didn't; so the timetable was wrong when it was posted and remains useless today. fbb thinks you are meant to glean which way the buses are going by the obvious highlighting of heading and times at Chard.

Below this timetable is some helpful guidance on First Bus special offers ... ... none of which apply under the recent but half-hearted rebranding.

If we are prepared to sit and wait in eager anticipation, we shall eventually see (10 minutes late) the 1229 to Axminster. 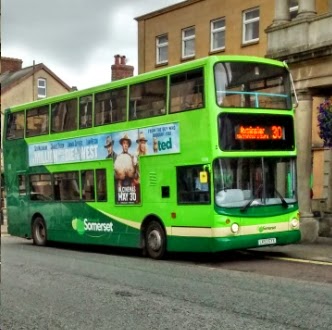 This bus is operated by Buses of Somerset, an identity kept as a closely guarded secret from the worthy Chardian residents.

But you can see the flag from the other side ... 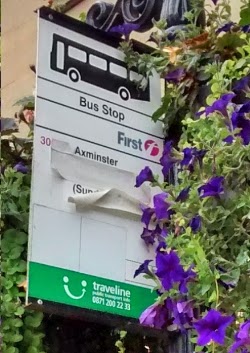 ... complete with First logo (who are they?), peeling sticky tape and and invitation to spend money by phoning Traveline. And there's another frame with a timetable in it. 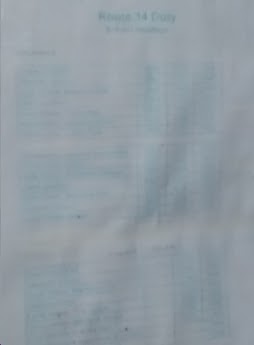 This, as you can clearly see, is for service 14 to the picturesque Somerset village of Duty. Times are shown for schooldays and school holidays; which is helpful. Regrettably there is but one omission from this classy sheet of information.

Service 14 only runs on Tuesdays. And it probably doesn't stop there anyway. Furthermore, we are forced to ask, "who runs this outstanding example of well publicised public transport?" It is operated by Dorset Community Transport. 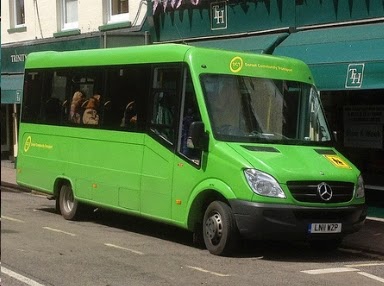 The sad fact, for the dozens of folk wishing to take their Tuesday trip to Forde Abbey and Thorncombe, is that there is no other information on service 14, times or routes, than that faded illegible and inaccurate notice on the frame outside the Guild Hall. One day, maybe, fbb will go to Thorncombe to investigate "the other end". Of course, if Dorset County doesn't provide easily accessible information, people won't use it and it can then be withdrawn. But it is all available on line and in Dorset's county timetable books.

Which aren't available in Chard! But fbb has a jackpot idea, a Baldrickian cunning plan. Print out a copy of the Dorset book version and, armed with Pritt Stick and WD40 (for undoing the frame bolts), stick it up your ...

Of course, there isn't a map. Traveline's version is unhelpful as the blue route lines obliterate any useful road names and obscure destinations as well. 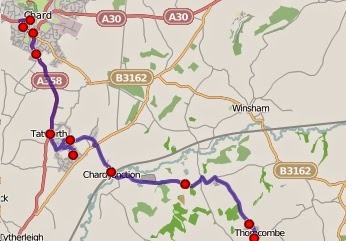 But does it stop there or not? To Google Transit we go ... 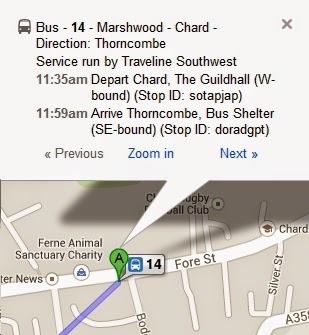 ... and the rubric does tell us that it stops there and it runs on Tuesdays only. Perhaps someone should tell Google Transit that public transport in the UK changed (mostly!) to the 24 hour clock around 50 years ago. According to this useful(?) site, the bus is operated by Traveline. Since when did Traveline run buses?

Right next to the ill-equipped bus stop outside the ill-stocked TIC is an equally ill-adorned finger post. It guides the hapless visitor seeking solace in Chard to the toilets ... 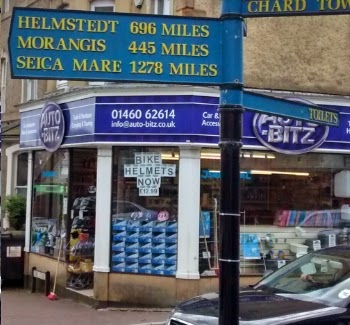 ..., to Helmstedt (Germany), Morangis (a suburb of Paris) and Seica Mare (in Romania). The "finger" points towards Bristol and not in the direction of any of these towns.

The other bus stop, by the way, is opposite the toilets ... 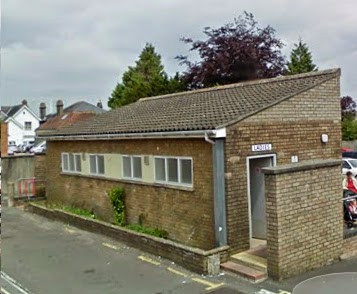 ... but a different set of toilets than those in the Bath Street car park, near Sainsburys.

Tomorrow we will look at Chard's "transport hub" in Boden Street; served by 99/99A buses in both directions, but by First Bus Buses of Somerset only towards Taunton. We have already, just about, discovered where we can catch the 30 to Axminster. You might ask how it is that Stagecoach manages to get 99s in both directions into Boden Street but First can't.

Perhaps there is a good reason?

As Aberdeen welcomes students back to the city this week, pubs, clubs and shops are stocking up for the inevitable extra demand. However, local supermarkets may not notice much of a demand for baked beans after bus operator First Aberdeen said it is giving away more than 2,000 First branded tins as part of its welcome for students to the Granite City. 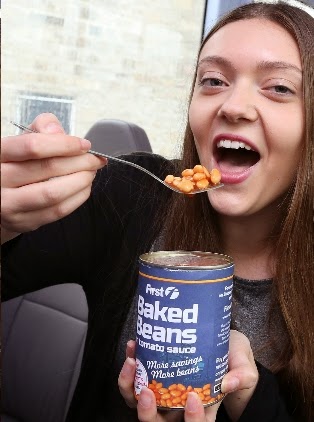 First Aberdeen's Marketing Assistant, Rachael Gordon, said: "Having just graduated from RGU in the Summer I know very well how important tins of baked beans are to students. They certainly seemed to dominate my diet during my four years as a student."

"Giving away baked beans we thought would be a great idea and help promote our student tickets which offer great value for money. We expect our heavily discounted £300 academic ticket (normal price is £350), which offers unlimited travel across our network from just over £1 a day, in particular to be really popular at freshers fares."

In case of letters from Aberdeen lawyers working for First, the picture at the head of this news snippet was NOT supplied by the Company press office. Sadly!