Before we return to the minutes of the Travel South Yorkshire Committee for Output of Cartographic Knowledge and Updates for Passengers, fbb will offer a little background.

Since (almost) the beginning of time, Sheffield trams ran from Malin Bridge and Middlewood in the north of the city, joining up at Hillsborough Corner. 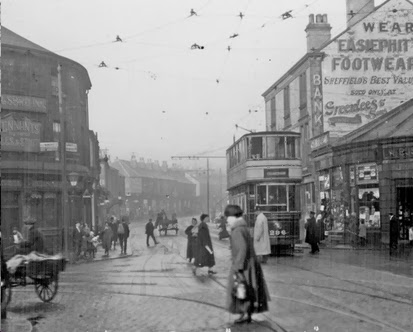 The route then ran via Infirmary Road to the city centre continuing via The Moor and Ecclesall Road to Hunters Bar. 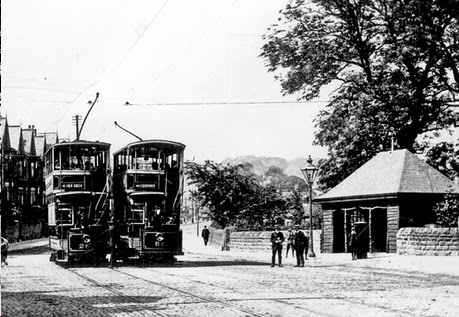 Thereafter the route split with one leg going to Fulwood and the other climbing the hill to Ecclesall. 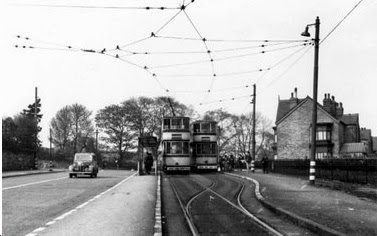 With the demise of the trams in the late 50s the replacement bus services followed a similar pattern. Despite numerous changes over the years, it is only relatively recently that the Hillsborough, City, Ecclesall routeing has been broken. It is worth recording, however, that this traditional link applied only to First Bus services. Stagecoach routes 83 and 88, introduced competitively and now enshrined in the "Partnership", never did comply with the age-old pattern.

The current (until the end of January, that is) network is that routes 11, 12, 13 and 14 run via Hillsborough and Infirmary Road to City and routes 81, 82 and 85 run from City along the Ecclesall Road. The split was made, presumably, to aid timekeeping but this was, initially at least, costly as it involved a great deal of mileage circling the city's punishing one way loops.

But it all changes from the end of the month; at which point we join the (reconvened!) committee minutes. A reminder that those present are; Director General, First Bus, StageCoach, the IT department and I M Keen, management trainee and observer.

DG : These are mainly yours, FB. Can you adumbrate?
SC : Only in the privacy of his own room! (laughter)

FB : In simple terms we are linking our Hillsborough group of routes through the city centre with the Ecclesall Road block. This will provide useful new links with the new Market thingey and with the Moor shopping area.
IK : Erm, excuse me?
DG : An important question, Keen?
IK : Important for the public, sir.
DG : Oh dear? Go on.
IK : Well, FB - haven't you just split these services so they didn't run cross-city?
FB : So what?
DG : Let's hear the plan in detail; and then, Keen, you will, perhaps, understand better.
FB : The 11 from Stannington and the 12 from Hall Park Head ... 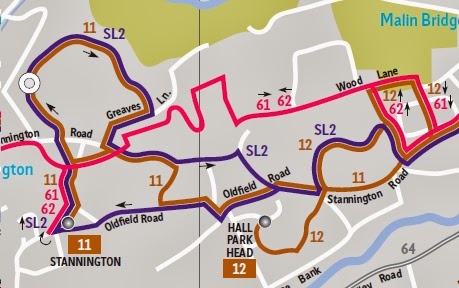 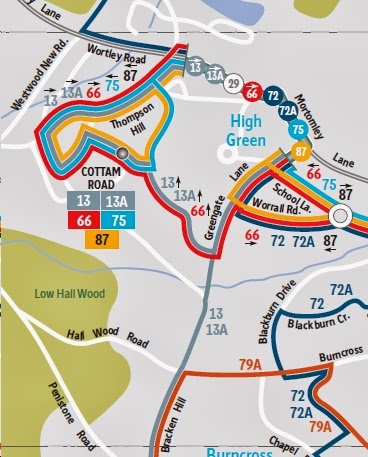 ... will run through to Millhouses via Ecclesall. And the 14 from Loxley ...

... will run to Bents Green. Now Mr Keen is right; we did split some of these routes a year or so ago. So to help the passengers, we will be going back to the traditional cross-city route numbers: 81, 82, 84, and 85.
IT : I am confused. (laughter) I thought Stagecoach 83 ran to Millhouses via Ecclesall and Stagecoach 88 ran to Bents Green.
DG : Impressive knowledge for an IT man! (laughter)
SC : Yes, that's right. What's going on? Is the Partnership breaking up? We'll need to do something about that if FB are competing with our routes!
DG : Calm down everybody. I think I've got one of our bus maps here somewhere. Yes; here is it. Let's look at Ecclesall. 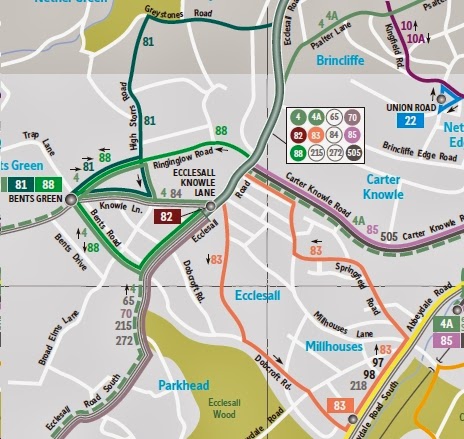 81  via Greystones to Bents Green, First
82  direct to the Ecclesall Knowle Lane terminus, First
83  direct to Ecclesall terminus then to Millhouses, Stagecoach
85  via Carterknowle Road to Tesco, First
88  to the Bents Green loop, Stagecoach
The 83 and 88 do not change; so we just have to think about the 81, 82 and 85.

Changes from the end of January

The 82 (Ecclesall) runs cross-city to Hall Park Head (previously 12) but half of the former 82 journeys run  to Stannington (previously 11) and are numbered 81 (which used to run via Greystones, but now won't).

So passengers for Greystones, Ecclesall, Loxley, Stannington, Hall Park Head and High Green all have changes of route number!

It's all very simple!

Back to the committee minutes.

--------------------------
DG : Do you need to ask your question now, Keen?
IK : Well sir, if we are confused by these changes and we are supposed to be in charge, then how will the travelling public cope?
DG : Mr Keen! If you want to progress in this industry of ours, you will need to learn a few home truths. Our job as the PTE is to ensure that bus services run efficiently and at the lowest possible cost to the taxpayer.
SC : And our prime duty as operators is to our shareholders; we need to maximise our profits by keeping costs under control and earning as much as possible in fares.
FB : We can't be bothered with trivialities like route numbers. The public will just have to get used to the new network. They've got buses, for goodness' sake - it doesn't matter a fig what the number on the front is!
DG : Does that answer your question?
IK : Well, I have a few more - about the leaflets themselves.
DG : Gentlemen; thanks to some, erm, valuable comments from Mr Keen, we will need to reconvene. How does next week suit you all?
--------------------------

Tomorrow, we look at the leaflets for these revised routes and services. With the help of Mr Keen's observations, we will be able to see if things have improved in the two years (plus) since the assurances given to fbb by the (former) Director General.

Next bus blog : Wednesday 15th January
Posted by fatbusbloke at 02:00