Apparently sticking sugar letters (spelling the name of Old Testament Prophet Ezra) onto the lemon flavoured goo was deemed to have "originality". 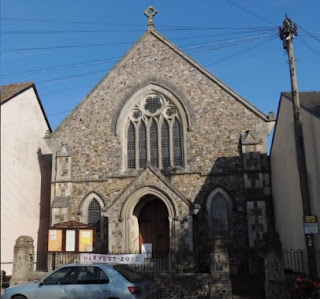 Ian Kirby, the part time minister (poor man has four churches to look after), came and introduced himself. In conversation, it transpires that he is a reader of this blog. (So such people do exist in reality, not just as a piece of statistical manipulation by Google.) "So you must be the fat bus bloke," he exclaimed with uncontrollable elation, excitement and professional deference (NOT!).

It transpires that during his recent sabbatical** he travelled by bus from Lands End to John o' Groats! He was raising money for Charity at the time, not just having a spiffing ominbological ego-trip. His Facebook page confirms that he shares an interest in public transport with fbb. And, elsewhere, this is how Ian described his plans.

The plan is to travel to Penzance on day 1 by train and then nip out to Land's End on arrival. The trip then unfolds as follows

Undaunted and unbowed by the rigours of his trek so far, Ian reports that he used his "free day" for a return trip to Leeds on the Settle and Carlisle railway line.

** A "sabbatical" is a special privilege enjoyed by "men of the cloth" whereby their employer gives them and extended break (weeks, months, a year?) in which to refresh themselves, spiritually. 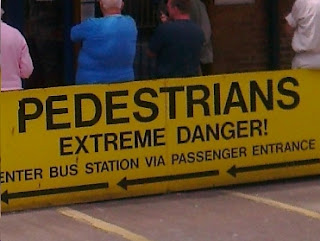 Fortunately, fbb arrived by bus, so he was not immediately traumatised by the terrifying waring signs. Whatever the reason, is this really the image the bus industry wishes to communicate to its customers? fbb thinks that the signs are a relatively recent addition and the rampant onslaught of over-the-top "health and safety" nonsense only contributes to the aura of depression that pervades First's exclusive terminal. 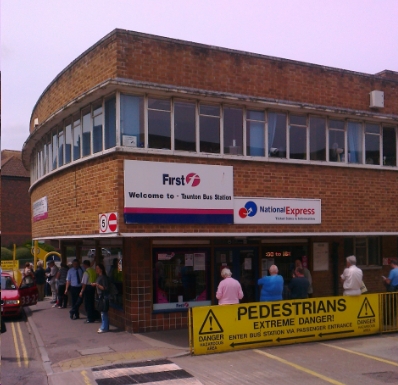 For how many years did the bus station manage to survive, a busier bus station no doubt, without terrorising its customers or killing too many of them?

Constructed in Tilling's 1930s architecture, the buildings look as if they have had no maintenance since National Bus Company days. Everything about them is tired and tatty. 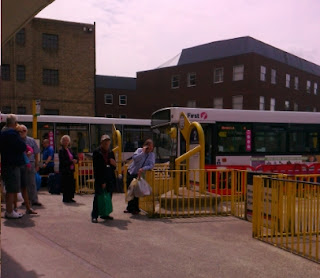 The only "useful" departure information is a collection of four frames with small-print timetable extracts. 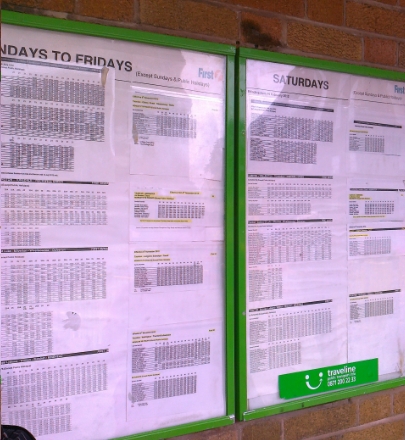 But there is an enquiry office and a scrolling display announces that it is open from 0900 to 1600 Monday to Friday (until 1330 on Saturday). 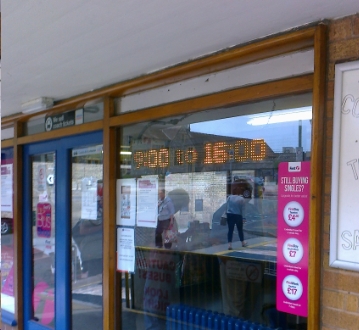 At 1240, fbb attempted to enter and nearly twisted his wrist on a firmly locked door. "And another one," quipped a jovial but frustrated potential passenger who had made the same mistake. In fact the clutch of folk with their backs to the terrifying sign (see above) were all waiting for the doors to be opened! Upon closer examination  a much smaller sign on the door announced a 1215 to 1245 lunch break. 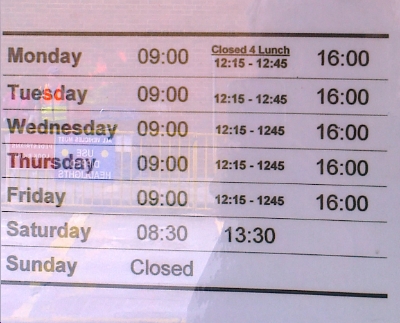 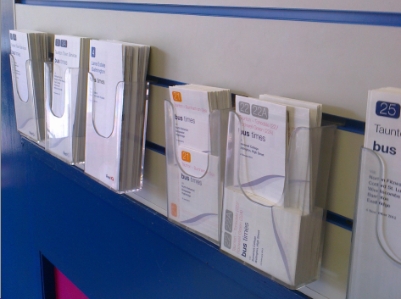 The scrolling sign also helpfully announced that the office held no information for any other bus companies. Whilst fbb can understand that not offering timetables for directly competitive routes maybe excusable, surely promoting bus travel generally ought to be good policy.

But the office sells N*t**n*l *xpr*ss tickets! And the eagle eyes of fbb spotted leaflets for St*gc**ch routes ... 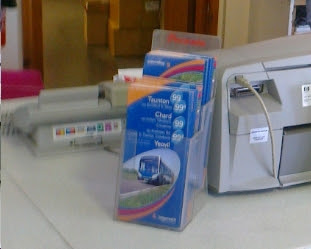 ... Shock! Horror! And it gets worse; there was a small rack containing three varieties of Devon booklets which include all operators. 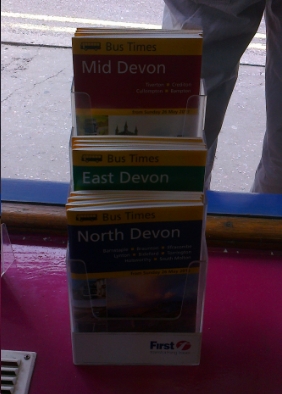 So providing other operators' timetables is fine if they run into Devon or if they are run by St*gec**ch or N*t**n*l *xpr*ss, but unacceptable if they run only in Somerset. What utter tosh and three quarters. 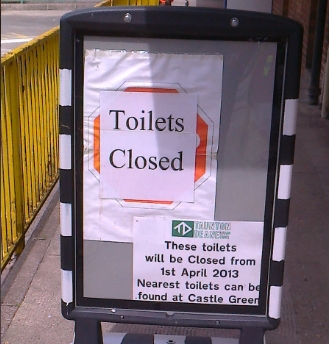 Presumably we all know where Castle Green is? And here is a really useful notice placed a goodly distance from the alighting stop ... 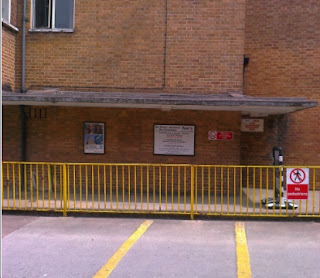 ... so that is it nearly illegible without powerful binoculars.. But fbb knows no fear and went over past the "Toilets Closed" board and read it; and didn't understand it. It might give inadequate information about getting from bus station to railway station.

But First Bus wouldn't want to encourage people to use the trains, would they? I mean, be realistic, the trains are run by ...

... and we wouldn't want anything to do with that lot, would we? You couldn't trust that Mr Brunel with his silly first names and that ludicrous top hat, could you?

Was there anything positive about Taunton Bus Station?

Yes! There was a poster, just one solitary poster, for an improved service ... 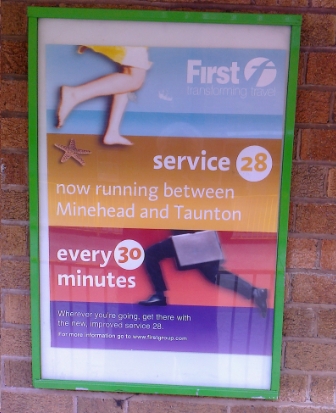 ... and a small but well-stocked refreshment kiosk ... 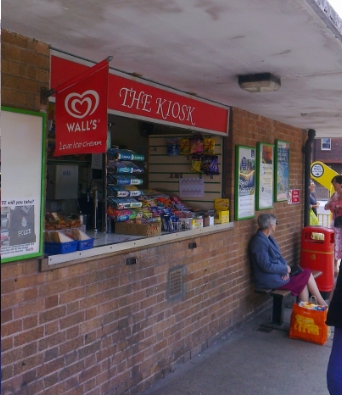 But there was one outstanding highlight which brought even more joy to fbb's near-total depression:- 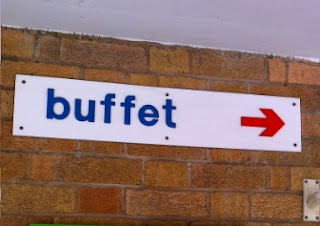 A National Bus Company plastic sign still in place 30 plus years after the progressive demise of Freddie Wood's brand-conscious empire. Preserve it. Or remove it - it is a bit modern for Taunton Bus Station.

But only First's services call at First's bus station. So next we must seek out the rest.