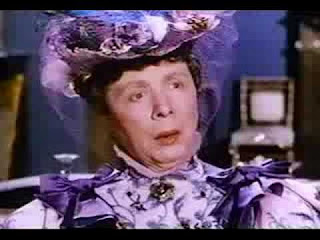 Just imagine the thunderous tones of the late Dame Edith Evans as Lady Bracknell in "The Importance of Being Earnest".   A handbag indeed!
Mrs fbb was on her way to a conference at Hoddesdon (Herts) and travelling trans-metropolis from Waterloo to Liverpool Street courtesy of London Buses route 26. 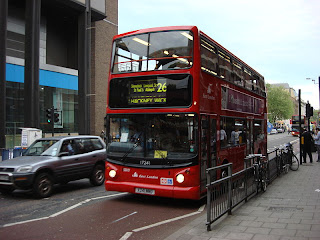 Sadly, upon arrival at Bishopsgate the aforementioned handbag was left languishing on the rearmost lower deck seat.   Mrs fbb is usually punctilious in the protection of her personal property - but this time, in her anxiety to escort her three "mature" travelling companions through the maze of metropolitan mystery, the handbag was forgotten.
Mrs fbb immediately rang Mr fbb and asked him to "do something"!   Meanwhile one of her chums arrived with three burly London constables who took details, made phone calls and then invited Mrs fbb and pals to "come alonga me" to await developments in the Cop Shop nearby!
The Bill made contact with the bus garage (East London Buses Bow depot) who raidoed their buses and - cheers all round - the bag was recovered and handed in at the self-same depot.   So a Hammersmith and City tube was needed to get to Bow Road station.   A very nice man at Lverpool Street Underground station gave her a free ride there ... 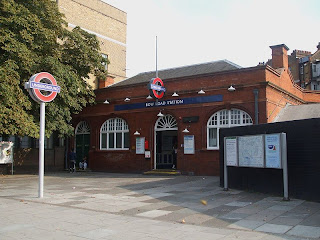 ... and so across the road to the depot. 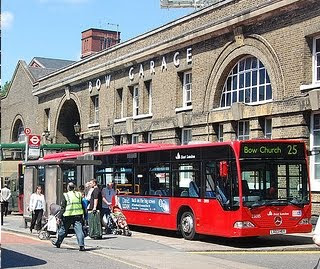 Here another very very nice man handed back the errant  item.   Not only that, but the very nice man arranged for a lift on a "positioning" bus journey to avoid a walk to the terminus.   Thus, relieved and rejoicing (and richer than she might have been!) Mrs fbb hied her happy way back to Liverpool Street!
So God heard Mrs fbb's prayers and all ended happily.
Many many thanks to all concerned : service above and beyond the call of duty!
Can we do it - yes we can!
Posted by fatbusbloke at 17:03