Where?
Caldercruix is in North Lanarkshire and 17 miles east of Glasgow.   It owes its existence to two industrialists; John Glen who developed a textile dying and printing business and Robert Craig who established a paper mill.  The name comes from the "crooks" - bends in the Calder Water river.  (Think curly end to a shepherd's "crook".)

Why would fbb want to go there?   Answer, he doesn't!   But there are signifant public transport developments pending in the area, so a little research was called for.
Historically the village was served by the green buses of the Eastern Scottish bus company - in recent years replaced by services from First Glasgow whose most recent map shows route number 262 from the City Centre via Baillieston and Airdrie to Caldercruix. 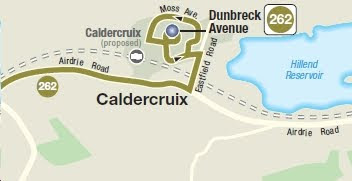 Prior to that it was single deck route 212.   The change from single deck 212 to (largely) double deck 262 was not popular with buggy pushing mums of Caldercruix, so much so that scheduled low floor journeys were introduced in February. 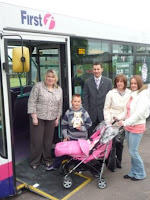 As a cross-check, fbb also had a look at the SPT (Strathclyde Transport) comprehensive map of Greater Glasgow. 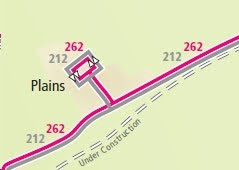 They keep it well hidden but patience and considerable teeth-gritting mouse pushing and keyboard clicking produced a simple but useful area map - also showing the 262 towards Caldercruix.   The map doesn't stretch quite as far as First's, but appears to confirm the route - Caldercruix is off to the right.
And so now for the timetable.   Heyho!   There is NO service 262 on First's website OR on Traveline Scotland which, joy of joys, actually lets you see a tinetable - if there is one to see, of course!   So something's happened - but what?
If xephos were up-to-date I could type in "Caldercruix" and it would list all bus services available.   Sadly it is not up to date.   (It will be in a few days, though!)  Why can't traveline provide such a simple facility?
So, the exercise becomes a frustrating and tedious battle with program writers who never travel by bus and insist the MY enquiries fit in with their technology.  [Mantra No. 2 for public transport information:- "NEVER let the the technology tail wag the information dog!"].   There are TWO bus services between Airdrie and Caldercruix - nothing through from Glasgow - the 212 and the 29.

The 29 is run by Stepend Coaches and operates at a useful 10 minute frequency Monday to Friday, BUT (at least according the Traveline Scotland) only HOURLY on Saturdays and nothing at all on Sundays.   Sounds wrong, BUT, there's no other source of this information, so it cannot be checked!  Below is the Saturday TT - perhaps? 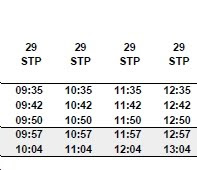 To complete the sorry saga of customer confusing changes, it would appear that the Glasgow service has been merged with the 62 (Faifley - Glasgow - Baillieston) by extending journeys every 20 minutes from Baillieston to Airdrie but not, so it would seem, to Caldercruix.
The big, and ever unanswered question is ... are all these complicated and confusing changes helping the bus using public; OR merely contributing to the profit margins of Moir Lockhead's Aberdeen based conglomerate.  The long term effect (as opposed to the balance sheet effect) is likely to be a continuing reduction of bus usage and a consequent increase in traffic, pollution and cost to the populace in general.
But there is some good news.   From December the noble village of Caldercruix will have a half hourly TRAIN service to both Glasgow and Edinburgh.   Three cheers!   Computer graphic below. 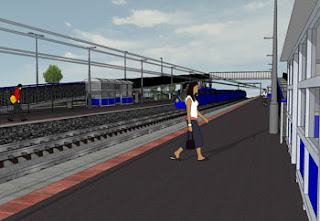