fbb rejected bus all the way from Seaton to Exeter for his 1020 hospital appointment yesterday; and has been looking at Park and Ride, particularly the dedicated Hospital service from Digby. 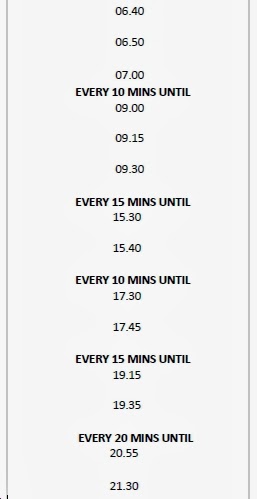 Unforunately the timetable on the NHS site omits a few salient facts. 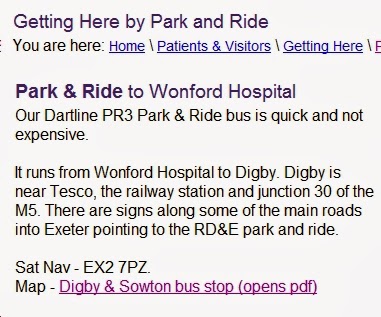 "There are signs along some of the main roads into Exeter." Too true, buster! But not the roads fbb was using; and that PDF map is hardly the most helpful, because ... 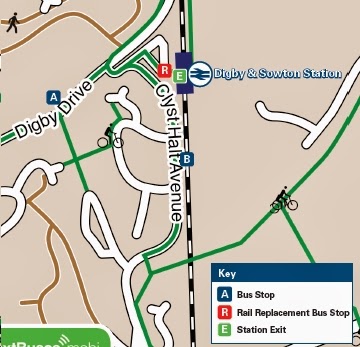 ... the "click" links to the Network Rail "onward travel" page; and we all know how good they are. It doesn't even mention Park and Ride!

But fbb has taken a wrong turn at the scary M5 junction and ends up driving along the A379 link road rather than Sidmouth Road. But don't panic Captain Mainwaring; fbb spots yet another sign to  ... 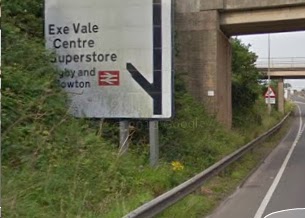 ... gby and owton station. [Does no-one trim undergrowth in Exeter?]. Although the Hospital Park and Ride is next door, it doesn't get a mention; until ... 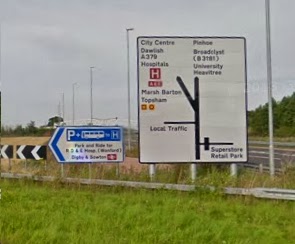 ... it's nearly too late. But fbb lurched left just in time and then the fun started all over again. Off we go on the Digby (or is it Sowton) magical mystery tour. 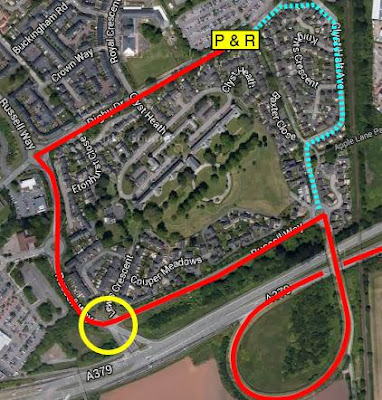 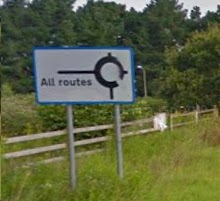 ... left at the roundabout, following the "All routes" sign along Russell Way to its junction with ...

... Russell Way! Here you turn right across four lanes of traffic travelling at faster than the speed of sound to and from the aforementioned A379 [yellow circle on map]. Terrifying!

fbb is rapidly going off this idea of Parking and Riding. It would, of course, be safer and quicker to go straight along Clyst Halt Avenue (blue dotted) ... 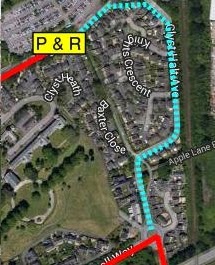 ... but the signs don't allow it. But by now, fbb (on his Saturday recce) had almost decided that he needed to examine some other options - if any. Just to complete his misery, he arrived (eventually) at the car park, only to find that the PR3 service only operates Monday to Friday and the car park is closed at weekends. 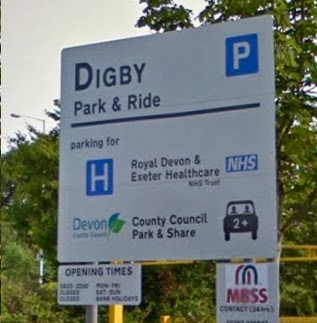 It would be nice if the Hospital's infromation page and PDF timetable mentioned this. No problem for fbb's Monday appointment, of course, but there is a further piece of unintended obscuration. There are ordinary buses that call at the Hospital according to their "How to Get Here" leaflet.

The leaflet is, of course, wrong! The H1 and H2 variants are now replaced with a single route H (for Hospital) and "the bus ... from the Broadfields area" is also route H.

To baffle the blogging brain, a quick glance at service H reveals that, as well as the Hospital itself, it serves our good (and well-hidden) friend, Digby Park and Ride. It goes there seven days a week ...

... and doesn't bother to tell you that the car park is closed on Saturdays and Sundays!

So fbb went by TRAIN!

More details, plus more confusion, will be revealed tomorrow.

"Madam, I'm Adam" said the world's starter man,
"Living in Eden's a peach.
We can help ourselves to all that we can,
Just one tree is put out of reach."
"That fruit, though," said Eve, young Adam's new wife,
"Looks like it's really delicious.
Surely a nibble won't lose us our life.
God isn't so nasty and vicious." 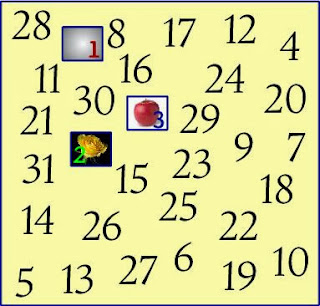 How do you create a perfect person? 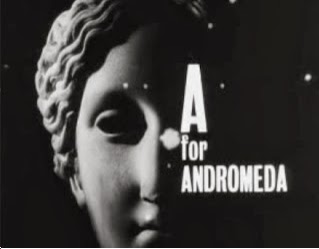 In 1961, the BBC broadcast a Sci-Fi serial (co-written by eminent cosmologist Fred Hoyle) in which a signal was received from somewhere in the constellation of Andromeda. The signal was an instruction to build a computer which, in turn "built" a "perfect" human being. It was (for its day) very, very scary! Sadly and feebly, the series ended with political machinations during which the fleeing perfect girl (played by Julie Christie) fell into a pool and downed. No-one had taught her to swim.

The Bible places humanity as the pinnacle of God's creation. Mankind is given "superior" abilities (made "in the image of God"), one of which is the ability to make decisions for himself. This gift allows humans to grow, physically, morally and spiritually towards "perfection".

But what if mankind choses wrongly? 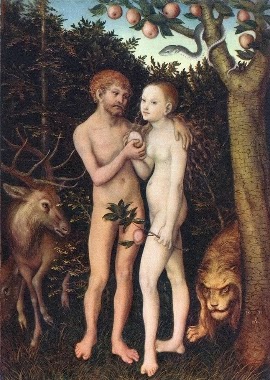 If you don't like serpents, fruit, trees and fig leaves (although the images are more than appropriate) consider the on-going implications of making the wrong choices.

Christmas is one of the positive consequences.