We are at stop Cc on Colston Avenue in Bristol waiting for a Wessex service 3. There is no timetable on display in the frame, but we do have the unhelpful privilege of a departure list. But there is a problem.

Buses don't go to Cribbs Causeway any more, apparently. They all terminate at Gypsy Patch Lane; which regular blog readers will remember is here ... 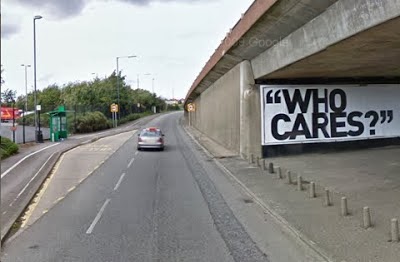 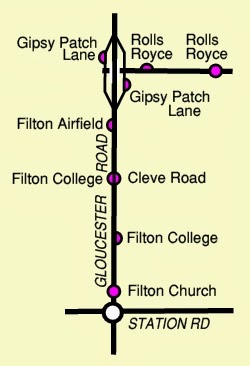 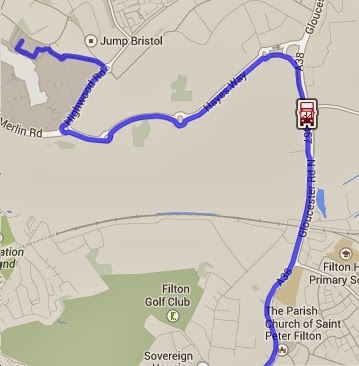 But we know differently, don't we? The map on their web site wiggles blue-ly on to Cribbs Causeway and the little animated bus (isn't the animation sweet and so utterly pointless?) ends up there as well. In fact, according to the Wessex 3 timetable, only two journeys (e.g. Mondays to Fridays from Bristol) terminate at Gypsy Patch Lane.

But the bus stop insists!

This is where technology comes to our rescue. (!) The computer program used by Bristol City Council (who put up the departure list) cleverly recognises when buses do not follow the normal route and adds an explanatory note.

So here is the 0845 running to Gypsy Patch Lane as in the Wessex timetable extract above. 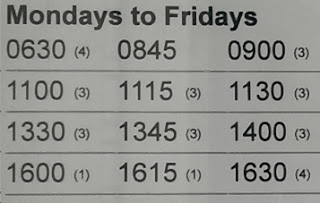 And here is the 1825 journey also un-annotated.

Every other departure has a note explaining a variation from the "standard" route terminating at Gypsy Patch Lane. Only two journeys are "standard", the rest are in some way "abnormal".


But things are different on Saturdays; there are 40 journeys from stop Cc of which only two (1730 ad 1745) are "standard"; of the rest, 33 have note "2" which is obviously different from the Monday to Friday's note "3". The Saturday note is explained thus:-

fbb is so pleased that Bristol City Council has explained that subtle difference so carefully! We can all sleep soundly in our beds tonight as a result of the Council's diligence.

But it gets worse.

What adds complications to the whole situation is that there are more 3s than meet the eye. Indeed there is a 3A, a 3C and a 3X; although the 3C doesn't start in the city centre. Here is a sample on the Wessex timetable ... 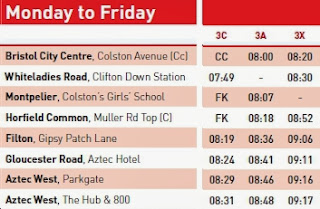 Now all thee do go to Gypsy Patch Lane and beyond, albeit with intermediate variations; but because they have different route numbers, there are different chunks of departure list at the Colston Avenue stop. Should you wish to ride Wessex Bristol to Filton, you need to consult all three: 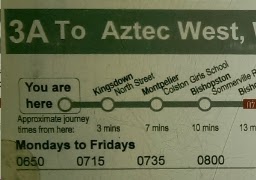 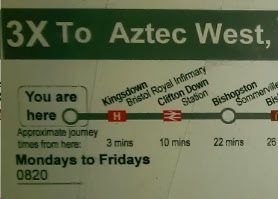 Which leaves us with another challenge. What is the difference between the morning route 3A journeys to Aztec West and the afternoon route 3 journeys to, erm, Aztec West? 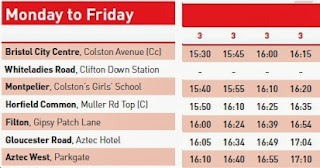 But that is another story!

There is, however, good news. Really!

Because of a change in Wessex Red's service 15 timetable, the whole panl has been reprinted and, three cheers and a chocolate peanut, the replacement 3 now runs all the way to Cribbs Causeway with a few short workings to Gypsy Patch Lane. Sense prevails!

Not quite! On the original panel there was a half hourly Sunday service ...

... with note 2 as expounded above. Note "WS3" (= "Wessex 3"?) indicates that the Sunday service runs on certain Sundays leading up to Christmas. On the new panel these seasonal extras have disappeared completely!

So do they or don't they? And if they do, how many passengers will not travel because they aren't on the stops' departure lists? Do the chaps at Wessex Red know about this? Do they care?

The plot remains a little on the thick side.

P.S. (heeelp!) : As well as the 3X occasional service, Wessex Bristol operates a route X3, utterly different and with little affinity for the 3, or the 3A, or the 3C, or even the 3X. Pass the tranquilisers, please.

Next bus blog : Friday 8th November
Posted by fatbusbloke at 02:00