What is a Hyperlink?

Yes, what IS a Hyperlink?

Perhaps a character from a Dungeons and Dragons game? 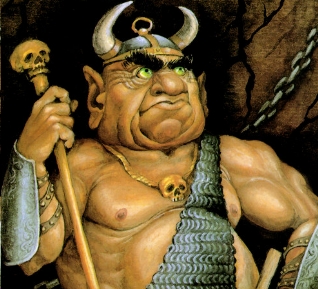 Any resemblance to a well known Public Transport blogger is purely co-incidental!

Or something to do with computers? 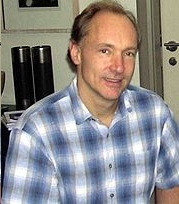 Tim Berners-Lee saw the possibility of using hyperlinks to link any information to any other information over the Internet. Hyperlinks were therefore integral to the creation of the World Wide Web. Web pages are written in the HyperText Mark-up Language i.e. HTML. Links are specified in HTML using a set of codes. These will be an expression in the form "a  href=page details" marking the start of a hyperlink, followed by the highlighted clickable text and the "/a" symbol, which indicates the end of the link.

... and you have returned safely! 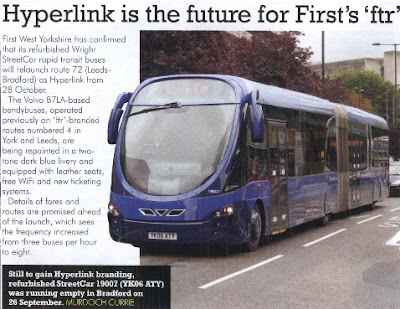 This from the November Buses magazine, published today. The upgraded (?) service 72 from Leeds to Bradford, using former "ftr" articulated buses, will be branded as "Hyperlink" with a slight increase in frequency. Unfrotunately Buses mag gets it wrong ...

Unfortunately the route number specified (72)
cannot be found in our database.
Please amend your search below
or view all timetable listings for Leeds.
Alternatively, you can call
Traveline on 0871 200 22 33
or visit www.traveline.org.uk 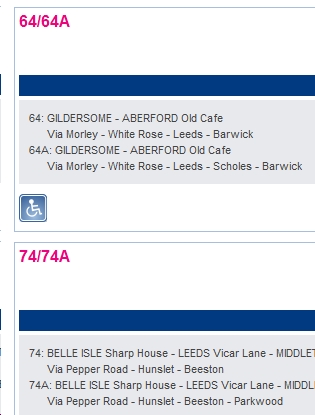 In passing, please note that First directs exasperated enquirers to Traveline. Surely a point of contact for the launch of a high profile top-of-the-range service should not be delegated to a mega call centre. If fbb were running the Hyperlink project (fat chance!), he would want dedicated enthusiastic "route-specific" staff to sell it.

The old 72 does, however, appear on the First Bradford site with nothing to announce the launch of the re-vamp. 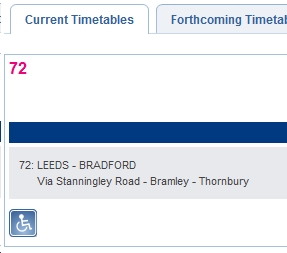 There is a timetable for the revised route on the WYMetro (West Yorkshire PTE) web site but it lacks any branding and cops out of quoting a "proper" frequency. It appears as a very normal route with no tangible change from the previous offering. 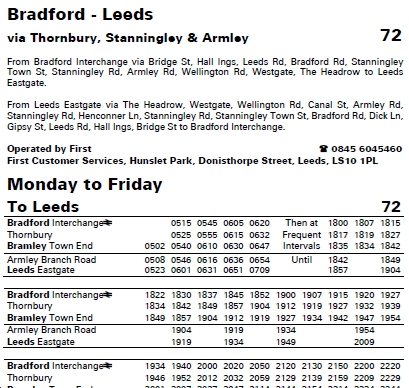 Giles Fearnley refers enthusiastically to route 72 in a wide-ranging interview published in the on-line "Route One" magazine yesterday. 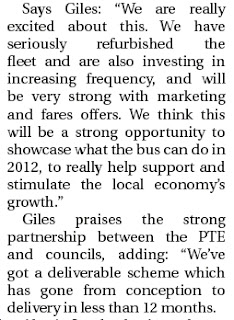 Lets hope that the "strong marketing and fares offers" appear before the service starts.

Earlier reaction on-line to the use of former ftr vehicles on the 72 was not particularly favourable.

This incredible nonsense simply beggars belief!! The Leeds to Bradford corridor is already excellently served by proper buses with plenty of seats and very adequate service frequencies. [every 8 minutes and with a lot more seats, fbb] Many people who object to being treated like unintelligent twits are fed up to the back teeth of the “First” spin thinking they can convince us that an articulated bus with metal spats over the wheels is a streetcar; a streetcar is an American tram and always will be. 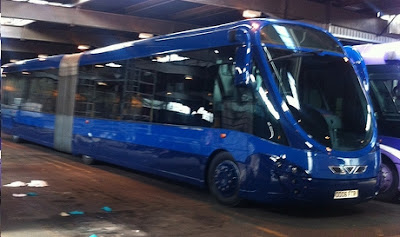 The rich blue livery is a pleasing colour, and would be far better applied to all “First” buses instead of the existing funereal [I thought funerals were black in the UK - fbb] lilac, white and pink/mauve nonsense. The phenomenal municipal benefits which are promised from this expensive farce are quite simply a paper dream; for pity’s sake bring a halt to it now before it starts and consign it to the waste paper bin where it belongs.

So fbb will be scanning the ether on a daily basis to seek out all the "goss" about First's Hyperlink. Watch out for more exciting detail later.

P.S. fbb thinks the brand name is "naff"!  An "informed source" has reported that a major PR event is due on Wednesday of next week.  Expect a hailstorm of hyperlink happenings thereafter.

Next Bus Blog : Saturday 20th October
Posted by fatbusbloke at 02:00