Then I cast loose my buffcoat, each holster let fall,
Shook off both my jack-boots, let go belt and all,
Stood up on the gas pedal, and caressed the gear,
Called my lorry his pet-name, my rig without peer;
Clapped my hands, laughed and sang, any noise, bad or good,
Till at length into Aix the truck thundered then stood.

And all I remember is, friends flocking round
As I sat with his keys ’twixt my knees on the ground;
And no voice but was praising this lorry of mine,
As I poured in his tank, litres one ninety nine
Which (the customers voted by common consent)
Was no more than his due who brought goods from Kent.
.

... by Robert Browning (of which the above are the last two stanzas with a few "minor changes"). The journey so poetically described was originally by horse from Ghent to Aix-a-Chappelle; alternatively Gand (Fleming) to Aachen (Deutsch)**. For the full, and unadulterated, text of the poem, (read here).

Today's blog is provoked by a chum who owns and drives a big lorry (we have to call it a "truck" these days; or is it a "rig"?) to destinations in Europe. His usual pattern of work is to leave the UK on a Tuesday via "Le Shuttle", flutter around far flung fields of french France and return to his base in Hellaby (near Rotherham) on a Saturday.
On this particular occasion he went from the Folkestone tunnel terminal in Kent to Aix-les-Bains in France, hence the tenuous Browning connection. 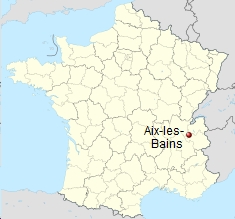 The town lies at an altitude of about 250m and stretches along the eastern end of Lac du Bourget ... 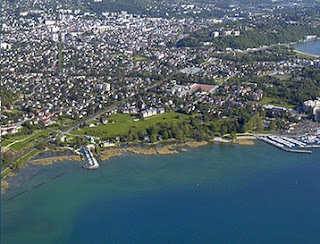 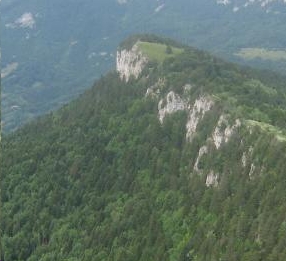 The western shore of the lake is narrower as the mountains along its edge are closer to the lakeshore, although lower than those on the eastern side. The lake drains out of its northern end into the Rhone river about 5km to the north. Aix-les-Bains is situated in the hilly country of the Bugey that makes up the foothills of the Alps and also forms part of the lower western extension of the Jura Mountains. 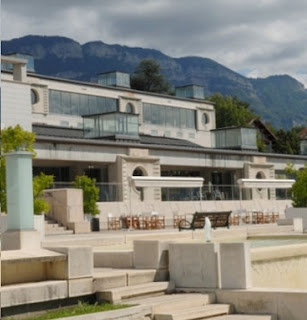 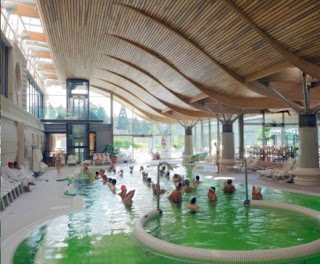 Posh, Private and Probably Pricey!
.
Aix derives from Latin Aquae (literally, "waters"; as in other towns; Aix-la-Chapelle aka Aachen or Aix-en-Provence), and Aix was a bath during the Roman Empire, even before it was renamed Aquae Gratianae to commemorate the Emperor Gratian, who was assassinated not far away, in Lyon, in 383. Numerous Roman ruins survive including the Capanus Arch. 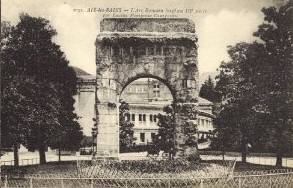 So, gasping in the heat of France, whilst we Brits were sheltering under our brollies with wellies welded to our little tootsies, chum David took a few photos.

But, let's begin at the beginning.

Like the majority of French towns, the bus network is a single contract franchise. The Local Authority accepts a tender from a bus company to run the network that they specify and at agreed prices. In the case of Aix-les-Bains this includes a brand name "Ondéa" owned by the authority.

C.A.L.B. is the regional political authority, Communauté D'Agglomération du Lac de Bourget, of which Aix-les-Bains (plumb centre on the map) is a part, ... 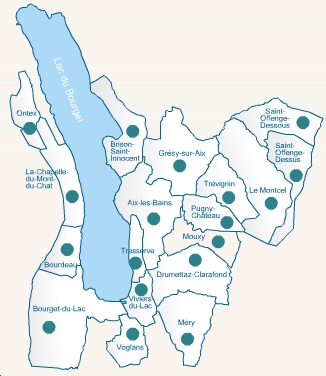 ... Ondéa is their brand and Keolis does the operating. Keolis is, of course, French Railways (SNCF) in a thin disguise.

Similar to Scotrail, then, the brand remains constant whoever wins the contract to run the network. There are many who believe such a scheme would be the best way of delivering public transport in this country. Sadly the "many" does not include the bus opertors or, apparently, the government if developments in Sheffield are typical.

So tomorrow we look at the network and its publicity in more detail. 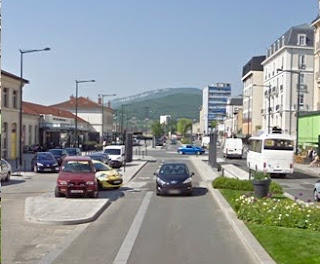 Whatever your politics, whatever your place in the transport industry, be it supplier or consumer, there is something very impressive indeed about the way our onion-selling chums from across the channel do things. 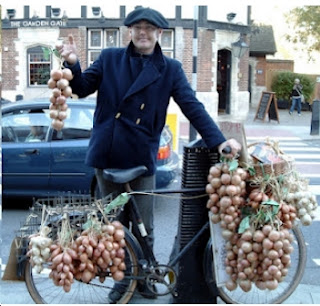 Incidentally, fbb found this little pic on the interwebnet. Is this a real French "vendeur d'oignons"? The beret looks wrong and he is stationed outside "The Garden Gate" pub in Hampstead, London. Maybe a local entrepreneur seeking to make a "quick franc (sorry, euro) or pound"? On ne sait pas.
Anyway, we should not be promoting racialist stereotypes, should we?
Eh bien, demain, nous examinons le réseau autobus d'Aix-les-Bains. Formidable! Ooh, la la!
** fbb bludner corrected by comment writes Dominic, below
Next Blog : Monday 16th July
Posted by fatbusbloke at 21:59