L'automatisation intégrale de la ligne 1
.
Following on from the success of the new metro line 14 in Paris, it was decided to convert the very busy line 1 to automatic operation.
.

In November 1898, Paris decided to undertake preliminary construction of a metro network with the building of the first line of the Parisian subway system. Work lasted twenty months under the leadership of engineer Fulgence Bienvenüe ... 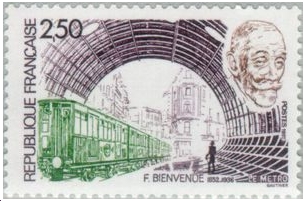 ... and was financed by the municipality of Paris. The line was divided into eight parts distributed between several companies and built on the "cut and cover" principal. 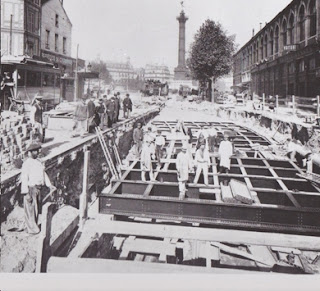 On 19 July 1900, the line was opened between Porte Maillot and Porte de Vincennes to connect the various sites of the World Fair. 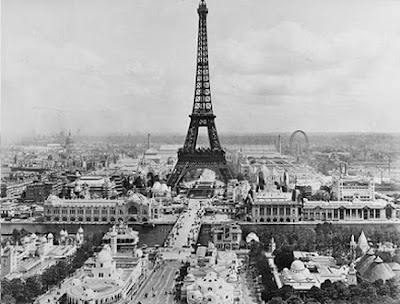 The full line was opened soon after; here is a train pictured in 1908. 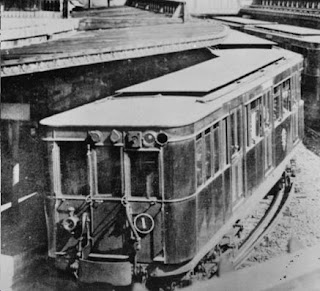 Today, it is the most utilised subway line on the network with over 725,000 people per day on average.
.
In the West, the line terminates at the spectacular Grande Arche de la Défense. 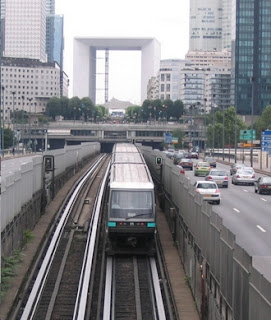 It is very hard to grasp the size of this magnificent block of exhibition rooms, offices etc. Even inside (fbb has visited) the size is difficult to gauge. Here are people on the steps leading up to the canopied area just visible in the shot above.

Rebuilding pour "l'automatisation intégrale", which commenced in 2007 and was completed in 2011, included new rolling stock, the MP05 units, and laying of platform edge doors in all stations.

This has been done mostly whilst the line has remained in operation.

This from the RATP web site:-

"Each platform screen consists of 18 door modules. Each night, teams install two modules, which will be operational when service resumes the next day. 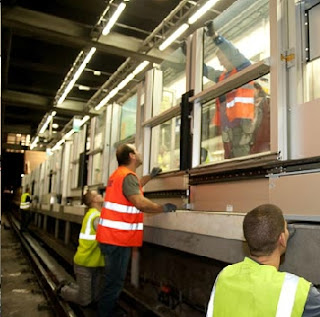 During this period, it is important to be vigilant and not to lean over the tracks at stations where renovation work is in progress. It is also essential to observe the new rules to ensure that the platform edge doors system works as smoothly and efficiently as possible."

Some stations have been closed for longer periods to install doors, but automatic trains have been operating alongside "normal" rolling stock until all the new units have been delivered. 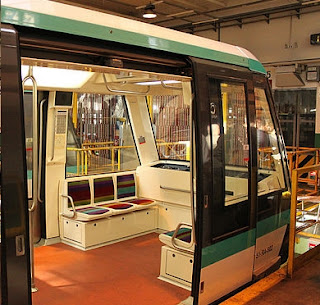 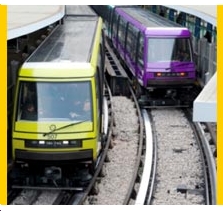 And some in pretty colours as well.

So the key question is:- if it can be done in Paris, on an existing line while trains continue to run, why can't it be done in London? Indeed, why wasn't it done since 1969 when the autumatic Victoria line opened? Why does it need to take so long over here? 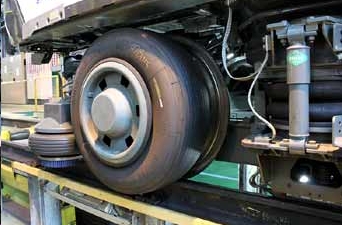 And for those unfamiliar with the excellent Paris Metro (which is busy even on Christmas Day!), the MP05 trains run on rubber tyres and are sleekly and spookily quiet.

Political posturing or potentially practical proposal?
.
Boris, Christian Wolmar and Bob Crow should all have a chummy weekend away in Paris and see how a really busy underground network can be run; without drivers! See Boris Blunder or Brilliant Bonus [1] (read again). But, there is a snag. It is all a much much more expensive combination of local tax, national tax and fares than in London.
.
The cost of converting line 1 to automatic was projected as 100 million euros. That figure does NOT include the new trains which are costing about 480 million euros although the existing Line 1 stock will be redeployed elsewhere so complex accountancy applies. Full automatic and driverless operation is due at the end of 2012.

As is no often the case in modern transport policy, you pays your money and you makes your choice!
.

Next : Saturday 28th April
Posted by fatbusbloke at 00:29