It all sounds very impressive in York!
According to the City's PR machine ... 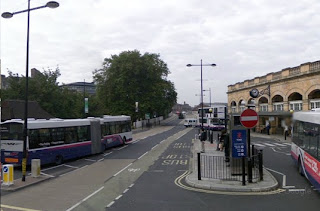 Customers can get to where they need to be, safely, quickly, on time and in comfort. The ftr vehicles change traffic lights to green as they approach. Computer systems will monitor the ftr fleet using satellite technology generating ‘real time’ passenger information displays at ftr stops along the route. The same technology allows customers to use their mobile telephones to text ftr stops to see when the next ftr is due. 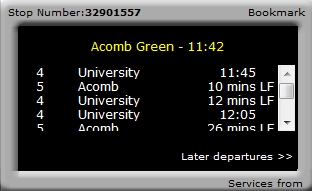 fbb used his laptop : it was hard work! It seemed to be a rather strange mixture of real time (10 mins, dunno what "LF" means, it doesn't say) and timetable times (1145). Neither the 4 nor the 5 is at the outer extremity of its route but because of the loopiness of the routes, you would catch the 4 to city from this stop, but the quicker, more direct 5 from across the road. It's hard if you are an occasional user!
Raised kerbs at every ftr stop means level access from the kerb into the ftr; making it easy for everyone to get on and off, but particularly helpful to disabled users, the elderly, and parents with buggies. 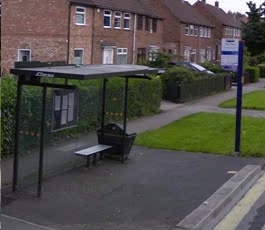 The ftr of bus travel? Really?

High quality means attention to detail. Each ftr vehicle is fully cleaned every night, both inside and outside. The ftr fleet is driven by a specially trained team of ftr ‘pilots’. Regular monitoring by both First and City of York Council ensures that standards are maintained, and problems ironed out quickly and effectively.
ftr uses the latest technology to deliver an attractive and realistic alternative to the private car for some journeys. It tells you what you want to know, when you need to know it. ftr is the future of travel. 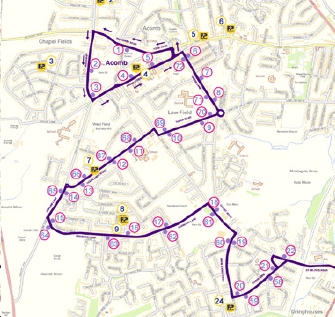 To the west of the city centre, the service follows a circuitous route through pre- and post-war housing estates with little opportunity to demonstrate its "ftr" nature ... 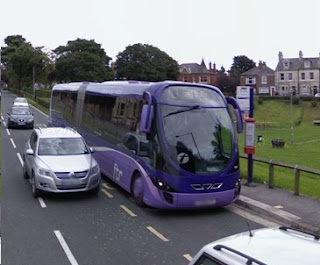 ... and you don't even get a shelter at the Acomb Green terminus. On the south east of the city, infrastructure in the University area is decidedly ordinary. 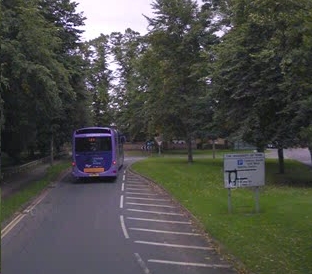 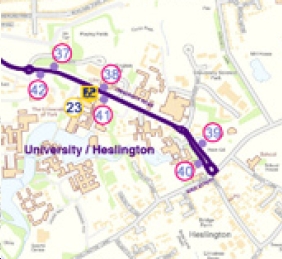 ... on a very poor and fuzzy graphic. The route now runs to the new Heslington East campus.

Note also that the competitive York pullman route 44 penetrates further into the original campus (left).
As a final disappointing look into the ftr, fbb shot off an enquiry to Transport Defunct. Simple, really, just a journey from Acomb to York Unversity ... 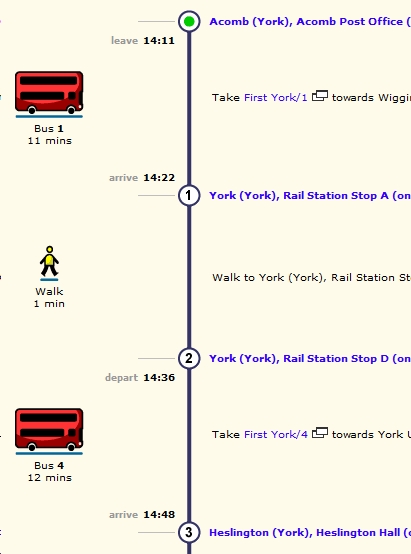 Well now, why is fbb not surprised. A 12 minute wait for a change of bus from service 1 to service 4 at York Station. Wouldn't it be more sensible to prioritise the through service 4? But, sadly, the whizzo technology can't do that. But fbb knows a man who can. 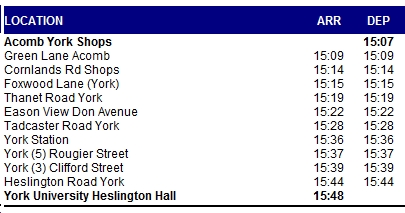 Xephos offers a simple journey with no changes and thus a much cheaper fare. And before someone objects that fbb didn't ask the right question, input for both was "Acomb" and "York University". Of course, Transport Defunct cannot cope with "York University" or even "University of York"; so you have to know that you search for "Heslington Hall". Obvious eh? 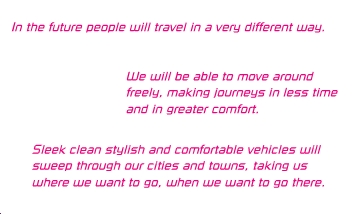 "In the future people will travel in a very different way." Maybe. But York's ftr doesn't look quite as rosy as First's propaganda might suggest.
P.S. As a final comment on the ftr, First's timetable shows some evening journeys "extended" to Acomb Post Office. 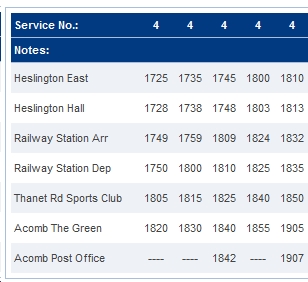 Next blog : due Thursday November 24th
Posted by fatbusbloke at 02:53