The Junction called Clapham: Confident or Confused?
Blogs based (loosely) on a business trip:
Thursday 15th September 2011
Clapham Junction began life as Wandsworth Road in 1838 for the London and Southampton Railway, later, of course, the London and South Western [LSWR]. It became a junction in 1846 when the company's lines to Windsor opened. The station is actually located in Battersea, but it is rumoured that the name "Clapham" was chosen because it was substantially "up-market" in comparison with the sordid Battersea. 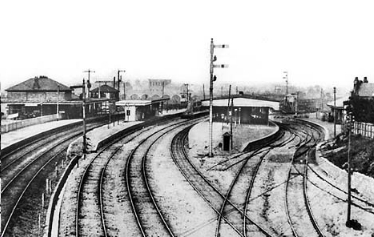 The West London and Crystal Palace Railway came alongside in 1858, reaching London Victoria in 1860 as the London, Brighton and South Coast Railway [LBSCR]. Finally in 1863 the West London Railway arrived via Kensington and Chelsea, and bringing, briefly, dual gauge (standard and the GWR broad) as seen on the right here. LSWR's Windsor lines are well off to the left.
So it could be argued that Clapham Junction is at least THREE stations; LSWR Windsor lines, LSWR main lines and LBSCR main lines. That three-way split still defines today's much extended building. The atmospheric night shot (below), from roughly the same spot, shows the two of the five LSWR main line tracks on the far left, the LBSC now with six tracks and the footbridge in a different architectural style for each company.. 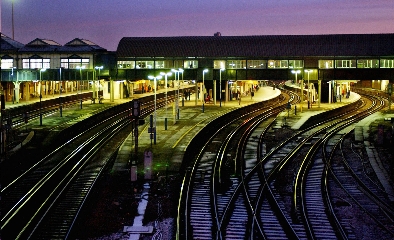 There are four platforms for the Windsor lines, leaving the previously noted Platform 2 for Overground trains.
Now an fbb confession! The portly one has NEVER travelled to or from Clapham Junction; changed there, of course, but never ventured outside the platforms. So the leisurely trip to Watford provided the ideal opportunity to have a look round.
Until a few months ago, there were no exits from the huge footbridge complex, but  a recent development is the re-opening of an entrance on to St John's Hill on he southeastern side of the platforms. This takes you "on the level" onto the footbridge which has now been provided with lifts to every platform. 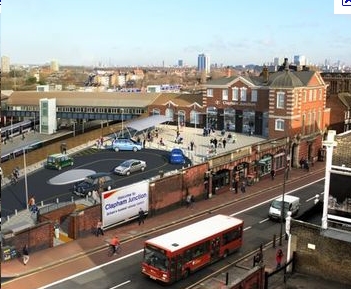 The other entrance, further along St John's Hill toward the City, is definitely underwhelming. 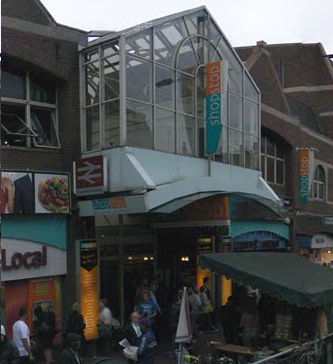 It leads, via a small shopping centre, to the other link to every platform, namely the subway. And another fbb confession! fbb never knew that the subway existed until this most recent visit. The footbridge facility is so huge and so distinctive, fbb had never explored further.

At the northeastern end of the subway is what might some might claim to be the "back door" entrance. 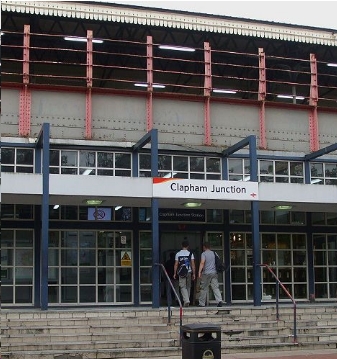 This opens onto Grant Road; the disused Platform 1 is up above. It looks a lot more inviting for the railway passenger than a struggle through shopping centre crowds at the other end of the subway. 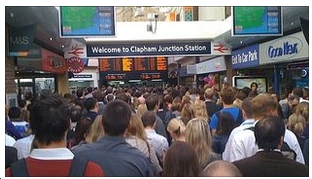 There are now 17 numbered platforms at the station, 16 in use. Herein lay the first snag for fbb's rather circuitous trip to Watford. He wanted a train to Shepherd's Bush. For the answer to the "why", you will need to read later blogs in this thrilling and informative series (?).
There are nice metal signs at the bottom of all the staircases leading up to the famous footbridge. They are headed "where to catch your train" and list destinations and their platforms. Sadly this list does not include Shepherds Bush, but then a sign with every possible destination on it would be to huge to read! But there is a more comprehensive poster sized, six-sided comprehensive alphabetical listing which offers the following ...
Shepherds Bush : 2, 16, 17
... locations at opposite sides of this huge complex, and a significant trap for the unwary. Of course there are destination screens ... 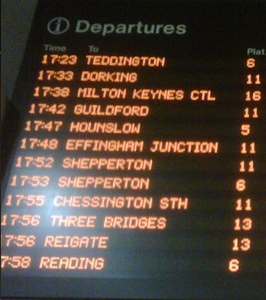 ... all over the place; but the search for the next train to Shepherds Bush does show how some "local knowledge" makes travel so much easier. Such local knowledge is best delivered by word of mouth, and by an experienced mouth at that. Remember there are a lot of tracks and a lot of trains ... 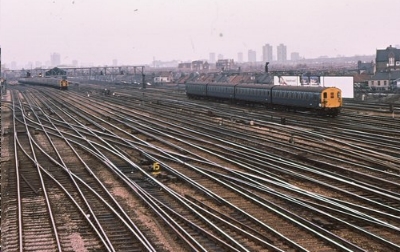 ... so you need to get the right one! Clapham Junction is the busiest in GB for number of trains. Measured by number of passengers, however, Waterloo (national rail) is busier and has more platforms.
So the essential expertise tells fbb that at Platform 2 (northwest side) there is now a 15 minute frequency of trains to Shepherd's Bush, continuing via Willesden Junction, operated by London Overground. 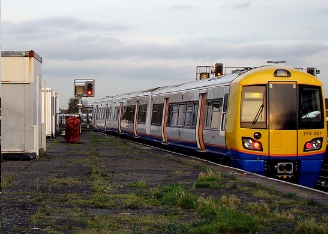 Platform 16 is where the "Southern" service to Milton Keynes calls. This is only hourly, and is followed a few minutes later by an Overground train; so the honest and helpful (albeit incomplete) answer is that for Shepherds Bush, Monday to Saturday daytimes, you go to Platform 2, always.
Which fbb did, in sprightly fashion, to catch his next train on his unusual roundabout and rambling route.
So, tomorrow, off we jolly well go for a short trip on the West London Line.
Other stations called Clapham (and probably IN Clapham) are available. There is Clapham High Street, soon to be served by London Overground, which is close to Clapham North on the Undergound Northern Line. Also on "the black one" are Clapham Common and Clapham South. But please don't expect great things of plain "Clapham" station. 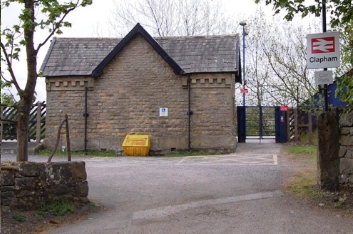 It is somewhat smaller than "The Junction", it is in North Yorkshire and is on the line between Leeds and Carnforth with a service of five trains a day in each direction.
Oh, and it's pronounced "Claffam".
Next blog : Tuesday September 20th
Posted by fatbusbloke at 06:35