A Potpourri of Petty but Pertinent Points

After nearly two weeks, the Southern Vectis web site is still NOT showing service 36, NOT even a mention. But the timetables DO include the new 35 which doesn't admit to serving Gatcombe, although it does. Or so we are told. As for service 6, the site shows FIVE journeys in one place ... 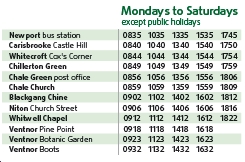 ... and TEN journeys in another.

It must take real skill to make such a mess.

Dear Mr Morgan-Huws,
fbb will build you a lovely, simple web site AND keep it up-to-date for much less that you are paying Best Impressions to do neither. Of course, it won't have lots of twiddly bits and slow-to-render graphical stuff. BUT it will tell the public what they need to know and it will ALWAYS BE RIGHT.

fbb won't, as they say, hold his breath!

"Can You do Any Better" (read  again)
Someone, possibly a relative of David Brown Director General, Sir, e-mailed in a "gurt paddy" to ask what was wrong with this bit of a recent Sheffield timetable. He said, "It looks perfectly clear to me."  So it does, fine friend, unless you happen to know where the buses run.

The key line is "Leopold Street" used by only three evening buses run by T M Travel, apparently. Oh, yes they do! But so do all the other buses in this direction. EVERY service 123 bus calls at Leopold Street. As is all too common in confuser driven data, this line has been included because it's what T M Travel say they do; but without a thought for what happens during the rest of the day.
And Traveline thinks the 123 service still terminates at Endcliffe Student Village, ignoring the recent extension in its index of services. This sort of thing, countermanding the actual timetable which is "correct" by South Yorkshire's very low standards, is typical of thoughtless technology.

It does this because of appallingly bad data management by people who seem to have removed their brain and substituted a cabbage.
"Worst Bus Station" (read again)
On 27th March 2010 in his 7th blog, ever, fbb highlighted the poor bus station facilities at Winchester, which they still are. But he can now go one better. 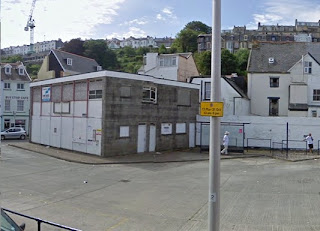 This magnificent pile of tat, boarded up and bereft of any facilities (well, bereft of anything at all) is the main building, no - the ONLY building, that graces the untold luxury of Ilfracombe bus station. First buses have bays to the right; no shelter, mostly no timetables.
Is THIS the most utterly depressing bus station ever? For accommodation expenses and a few pots of paint, fbb will happily emigrate to Devon, even out of season, and brighten things up a bit. The picture above, however, is well out of date. So maybe in the interim a bright and commodious new state-of-the-art facility has been built, perhaps as good a Slough (?).  Hmmmm?
"Sheffield Subsistology" (read again)
Semitic Subsistology Standards?  Subsistology (an fbb-coined word for the study of bus stops) often reveals poor standards in GB. But this internet based picture of a stop in Jerusalem beats anything fbb has ever seen in GB. Unless someone know differently? 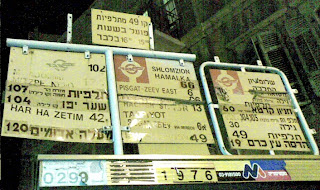 This dinosaur of the bus stop (below) was still in place recently at a near-lethal junction in Sidford, Devon. Alas, according to local Sidfordian gossip, it is now no longer in use. Shame!

A poor low-resolution extract from Google Street View, but you get the idea. Here it is almost attached to the wall of the Rising Sun to the right of the garage doors. 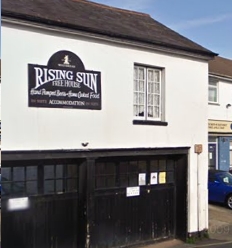 But, is fbb (and local gossip) wrong? Mayhap the oldest bus stop in Devon IS still in use; this from Transport Defunct:- 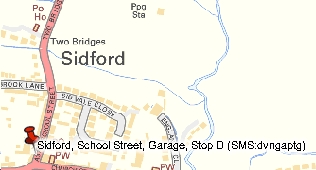 Perhaps a blog reader will tell all our slaveringly excited readers the truth. Stop or non-stop? 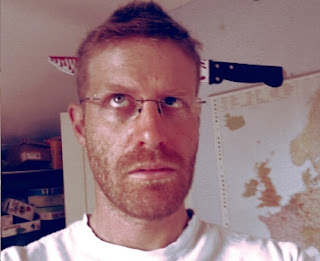 Herewith a visual aid from one of No. 1 son's lectures ... 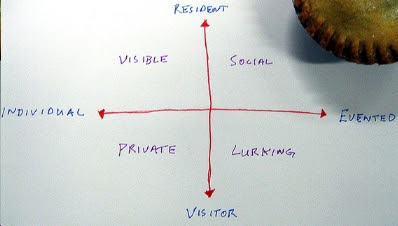 
"Euston We Have a Problem [5]" (read again)
No 3 son sends photos of recent developments, notably lifts and new access between the main councourse, 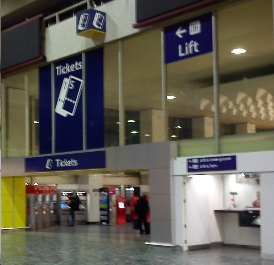 the Underground ticket hall and taxi rank area, seen from the escalators down from the concourse. 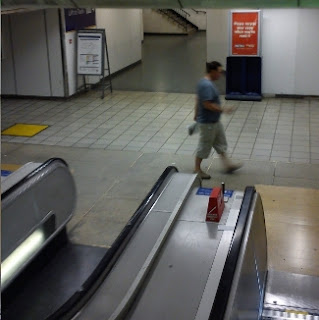 Plus a new Sainsburys ... 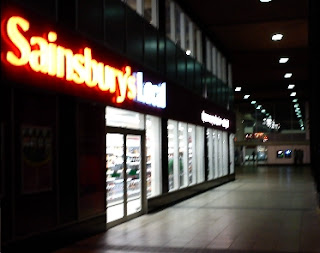 ... where he can buy yummy stuff before catching his train back to Watford. There are also rather menacing red monsters from an episode of Doctor Who waiting to devour unsuspecting potential ticket purchasers. 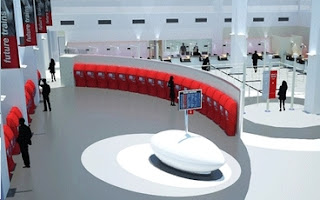 Ext---errr---minate!
Well, it's one way of reducing overcrowding.
Next blog : Saturday September 17th
Posted by fatbusbloke at 06:39