The Leyland's not for Turning

A paraphrased past politicial point;
pathetically promoting these paragraphs.


A recent blog about bus and tram terminus turning arrangements (read again) encouraged fbb's fevered brain to have a look at similar arrangements for bus services.  Back in the days of Leyland PD2s and 3s, AECs and delicious Daimlers, it was normal for your terminating bus simply to reverse into a side road, as here at Barncliffe Road on Sheffield's long standing route 60. [fbb's local route for many years, remember?] 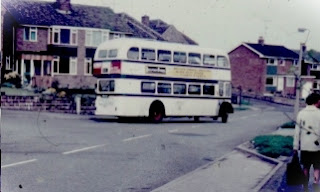 The 60 had an even more spectacular arrangement at Midland Station, simply a big "U" turn across a busy city road. This would not be a good idea in 2011, even if it were physically possible, which it isn't. 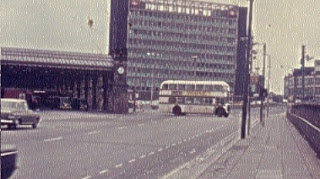 Apologies for atrocious quality of these two pics; they come from fbb's rapidly decaying collection of colour slides.  In today's view, only the former Kenning's building in the far background is unscathed by modernity. The "porte cochère" at the station is now the fully enclosed passenger concourse. Rail House (behind the turning bus) has been demolished and replaced by a multi-storey car park. 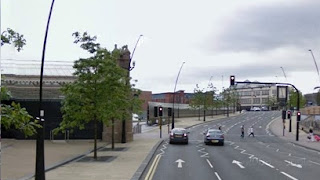 This was one of fbb's favourites ... 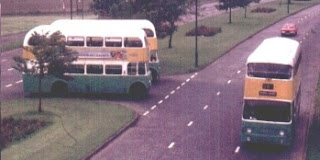 ... Blairdardie (Yoker Burn) where Glasgow Corporation route 16 buses simply parked in the central reservation of the Great Western Road before their return trip to the city. The turnaround is still there, behind the somewhat bigger tree, but no longer in use. 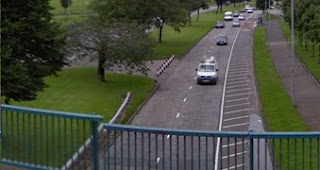 fbb wonders whether today's highway engineers, even today's omnibologists, will know why it was constructed.

Also in greater Glasgow, a long extinct Alexander Midland route to Mugdockbank in Milngavie sped past the reservoirs and reversed here ... 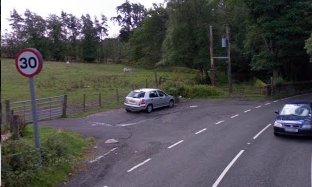 ... the unsurfaced "bay" being strengthened, then, by old railway sleepers.  The residents of the village of Mugdock then had a long uphill walk back home via a narrow winding road or across fields.

Here in Derby, the service 46 to Grange Road Alvaston reversed into this special nibble, cut out of the grass verge, at its junction with Holbrook Road. (below, right, in shadow) 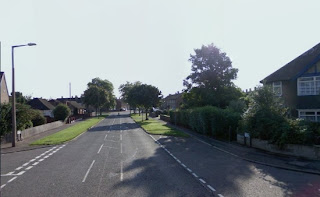 The estate and the bus route were both extended some 40 years ago, but the mystery nibble remains.

Sheffield Corporation famously provided a "gents" at the outer end of every tram route.  This was an essential facility in the days of open cabs and long shifts with no "layover" permitted in the city centre. When bus replacements came along, they often built quite substantial turning circles with loos as here at Intake, erstwhile terminus of the busy cross-city service 95. 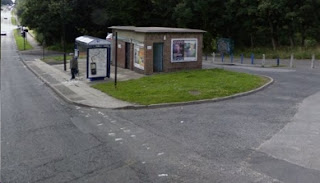 With service revisions taking buses further into the outer suburbs, this turn-round facility is to longer used on a regular basis. Back in the 60s, if fbb remembers correctly, the building also housed a newsagent's kiosk.

Another Sheffield dinosaur remains near the former Norfolk Arms pub on Manchester Road, near Rivelin Dams ... 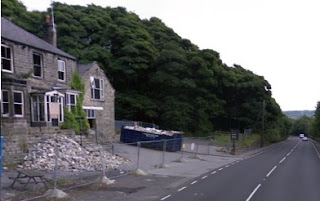 Here, Sheffield service 54 reversed into the pub car park on a blind-ish bend until 1989.  Twenty two years after the route was curtailed to Rivelin Bridge Post Office, the warning sign for approaching motorists,  "Bus Reversing Point Ahead", still protects the ghostly crews. 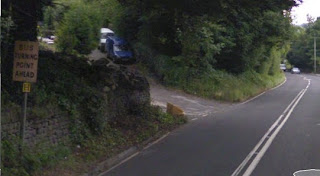 From July 24th, even bus 64 to the former Rivelin Bridge Post office is withdrawn, although infrequent longer distance service run past. 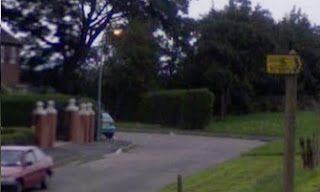 It is on the present 97/98 service at Yew Lane.  The original Yew Lane route 89 started in November 1951, but fbb suspects that this historic piece of infrastructure was added when the service was reorganised in 1969. Still there guiding First's drivers, 42 years later!

Back to backing buses.  In todays "elf'n'safety" conscious world, reversing buses is not popular with the authorities. Even so-called safe turns can be a problem.  Again in Sheffield, the facility at the Cross Scythes, Totley, was withdrawn; it could be tricky, especially if pub-goers cars were parked unwisely, leading to some fairly "hairy" jiggles. 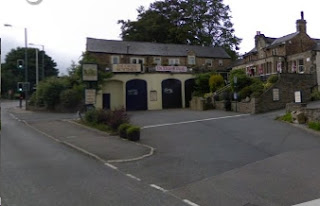 This is now replaced by a brand-new turning loop about a mile further out into open country. 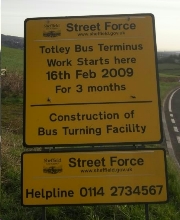 It was completed too recently to be caught by google's ever spying eye, but it is here, 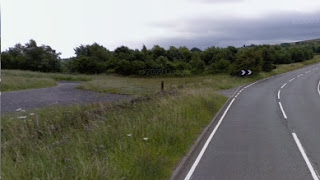 near the footpath to Gillfield Wood and few hundred yards short of the City boundary. The extra cost of running buses empty on a two mile round trip to nowhere must really pain the financial philosophy of the Fearnley!

In Sheffield, at least, one reverse still remains and it is at the other end of the previously mentioned frequent service 95. Vehicles originally reversed by turning from Bole Hill Road into the narrow Tinker Lane ... 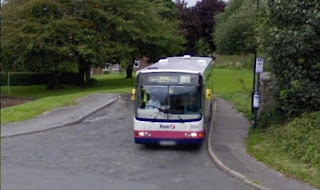 ... but the lads from Sheffield City Council have built a nice lay-by a few yards up the lane, behind some flats. Here is a shot of a 95 having dutifully reversed in to its neat and natty nibble.  Stagecoach's less frequent route 123 performs the same manoeuvre, but not for much longer. The Stagecoach Walkley leg is withdrawn from 24th July when the 123 is diverted to the Endcliffe Student Village.

"Reverses" are now very rare indeed (except, possibly, on quieter rural routes) and fbb would appreciate details of any in busy urban locations.

Hey, there's more to omnibology than eulogising about Volvo B75G Mark 2As or scribbling fleet numbers into a tiny notebook.  There's real social history around if you only look for it.

To celebrate the outbreak of a limited peace between First and Stagecoach in Sheffield, from Monday onwards, fbb will be presenting a full 7 days of South Yorkshire blogs ; beginning with "Oh, Oh, Optio Orange" on Monday 4th July.

Next blog : due Sunday July 3rd
Posted by fatbusbloke at 06:08