The Unpleasantness at Rotherham 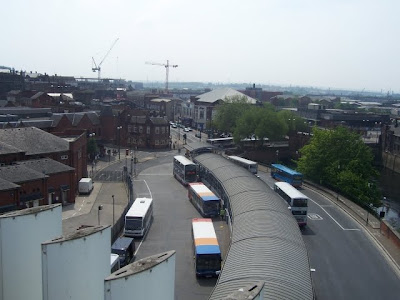 Rotherham Interchange is one of the excellent facilities provided by South Yorkshire Travel; with plenty of leaflets, a real person to ask, alphabetical departure boards, undercover waiting, and even an adjacent cafe - impressive. The (supposedly simple) task was to catch the No 33 bus to Crystal Peaks (a place of joy and beauty, see below??) ... 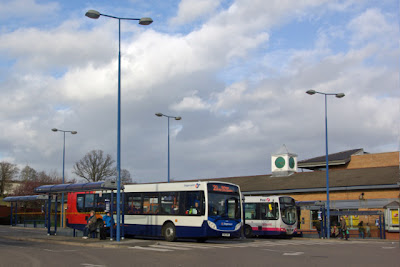 ... and by a flooky chance, on a particularly sunny Wednesday, we were standing at the correct departure bay, B4. When was the next bus?   We had missed the 0930 and were at the stand at 0950.  "Where's tha goin'?" enquired a helpful fellow passenger. "Crystal Peaks" was our confident reply. "Every our on't'our."

But, we riposted hesitantly, the list there says 1030. "I ought t'know," he said, somewhat aggressively, "I travel on it ev'ry day!"  We are joined by a buxom lady of indeterminate age who spoke out with gusto. "Aye, 10 o'clock fer Crystal Peaks, luv."

And, indeed a No 33 pulled up at 1000 - NOT going to Crystal Peaks but only to Treeton, about half way there.   We quietly retreated to the cafe for a cuppa and to try to understand why the locals were getting it wrong - or were WE simply going mad?

Reason 1 : the 33 timetable had changed twice in quick succession; at the end of July and then again at the end of August.  Not entirely conducive to the comprehension of complicated information - BUT

Reason 2 : (and the real unpleasantness at Rotherham) the potentially incomprehensible display of departures on the bus station stands.   Below is an extract re-created by fbb. 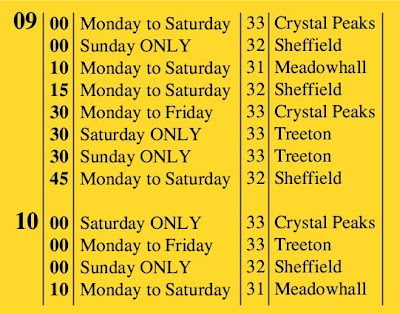 Route numbers all jumbled together, different day's times all jumbled together and no indication that buses to Crystal Peaks all go via Treeton.   Neither was there a clear indication of all the other places served by the network of routes to the Brinsworth area.  And only a bus-nut would contemplate the 32 to Sheffield as it goes a long, long way round.   An fbb map explains all - perhaps ... 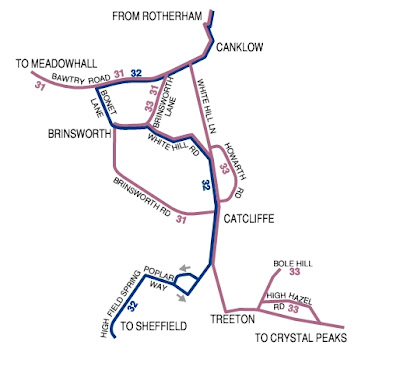 Question? What is wrong with listing Monday to Friday departures, Saturday departures and Sunday departures for each route in turn? Maybe adding a summary of all buses to Canklow and Brinsworth for those just travelling locally. Or even better, posting copies of the timetable for each route - then we could actually work our when we might arrive as well! And a map is absolutely essential - and NOT one of those unhelpful and inaccurate London-style "spider" maps.

Frustrating for a visitor and, apparently, equally baffling to the regular traveller.  Despite the attempts of South Yorkshire Travel to obfuscate relatively simple information we did actually catch the 1030 to Crystal Peaks.

And why the differences between Monday to Friday and Saturday times?  Aha, that's easy!  On Monday to Friday the 33 "interworks" with the 27 which doesn't run on Saturdays.   Now that explains everything, doesn't it?

After all, buses are always run for the convenience of the company - why let passengers' needs get in the way?