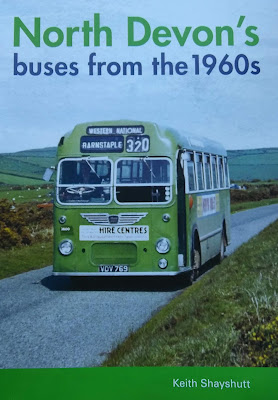 In Part 1, Keith Shayshutt's book has taken us back to the good old bad old days of nationalised public transport in the UK. One correspondent immediately got in touch to proffer this view of those fondly/unfondly remembered days.
Surely what Keith’s book shows is the failure of inconsistent national and local government policy towards buses.

Train service hourly having had money thrown at it.

I wonder how many passengers were carried in 1982 and in 2020? But the proportion of the population who rely on public transport has reduced over 40 years.

fbb is not sure whether the PVR of the dominant company is a good comparative measure as it excludes the smaller independent operator, most of which have disappeared! But, of course he is right, and remains right; national and local government policy remains inconsistent.

Also of note is that quite a bit of North Devon's rail network has gone since 1960. Ahh, the joy of the Atlantic Coast Express! 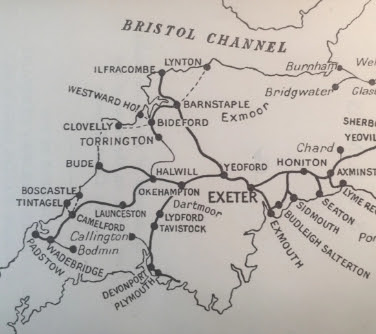 But, from a bus point of view, 1986 was to change everything. In came the sale of the National Bus companies, deregulation of the licensing system to allow "more competition" (snigger!) and the requirement for municipalities to sell or stand back from their assets.

... effectively the privatisation of the former Southern National. It was a big area to manage, stretching west from Weymouth to Exeter and northwards to North Devon. At both ends of the operation, competition from existing independents was fierce and, as usual, destructive.

In North Devon, the bugbear was Filers who attacked all the Red Bus "main line" routes resulting in droves of empty buses chasing the passengers between Ilfracombe, Barnstaple, Bideford and Westward Ho! - and elsewhere.

Cawlett responded in typical fashion with extra buses and a new brand. 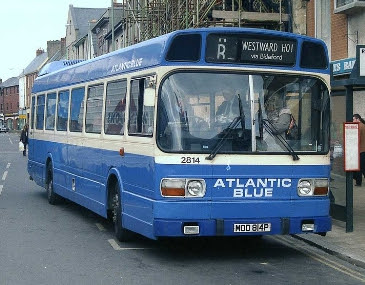 Outstations were rented to keep operating costs down, a policy which expanded under privatisation as operators sought to take on more tendered work - often simply to keep the opposition at bay! Here are a couple of Cawlett minibuses  snoozing at their outstation at the BP garage on the A39 near Bude. 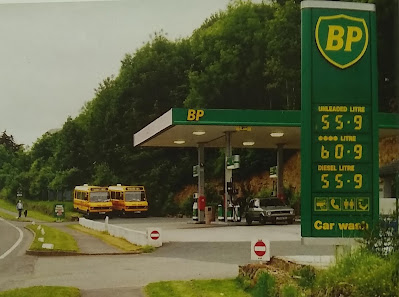 And, this time, it has change a lot! No Cawlett, obviously, but ... 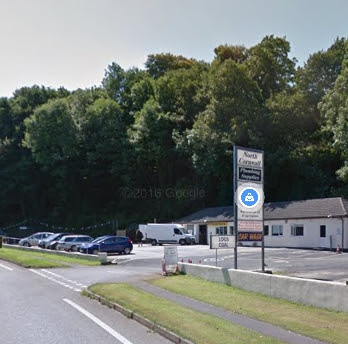 ... no petrol station either!

As the Cawlett Years progressed, it became very obvious that politician Nick Ridley's view of the joyous benefits of a public transport "free market" were struggling. 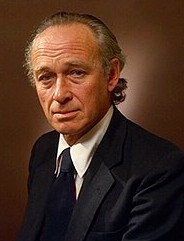 He had enthused in Parliament and to an adoring Tory public that deregulation meant that local entrepreneurs could buy a bus and run services for local people into the local town and back untrammelled by the nasty Traffic Commissioners and the might of the National Bus Company.

As it turned out, nobody was really interested in these idealistic village services so Local Authorities were forced to put them out to tender. Cue another round of competition for routes, usually by one-bit operators who quoted too little and went on to fail. The pattern was not universal but it did expose the problem of the non-commercial bus route - one that remains today.

Enter the bags of shiny state aid in the form of the Rural Bus Grant designed to undo some of the disasters of deregulation. Services did improve dramatically, but for how long?

But the big boys were circling. Why the sweat and tears of running buses when Grampian/Badgerline (begat First), British Bus/Drawlane/Cowie (begat Arriva) and the eternal and unchanging Stagecoach were prepared to pay silly money for your business. At this stage GoAhead only went ahead in the North East! 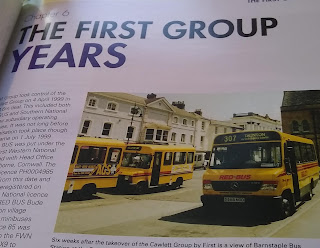 With the glorious gift of hindsight, you have to wonder why First bothered. Their "years" in Red Bus land seem to be characterised by loss of tenders and the arrival of cast-off buses from all parts of their growing empire. Woolacombe offers a typical sample ... 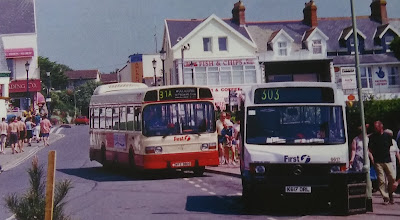 ... with a Western National minibus and a Provincial Leyland National in attendance.

But it hasn't changed much. The chip shop still sells chips and the premises opposite purveys tourist grot requisites ... 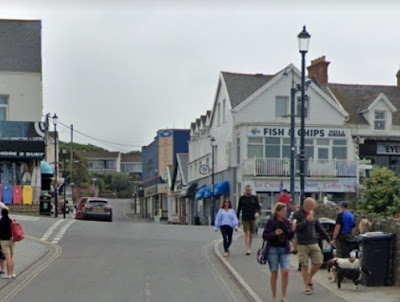 ... but the bus stop has moved further down the road.

Cast-offs even arrived from Aberdeen as seen here in Instow. 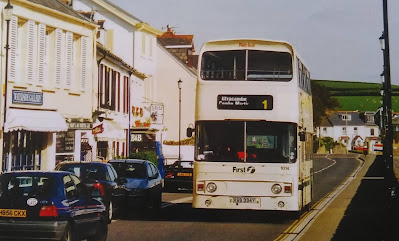 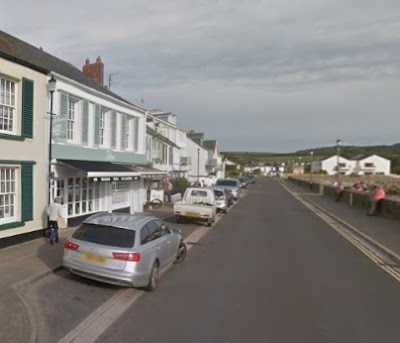 Competition did provide some particular entertainment for bus watchers in the shape of this:- 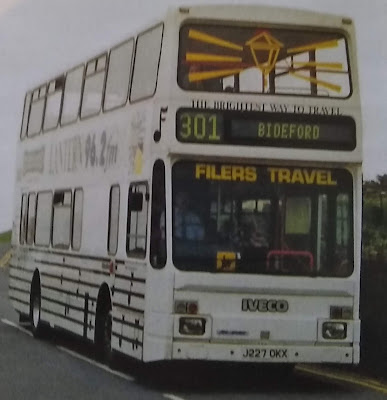 The bus was the only Iveco double deck vehicle built for the UK market. It began life as a demonstrator seen her on Solent Blue Line's Southampton city route 19. 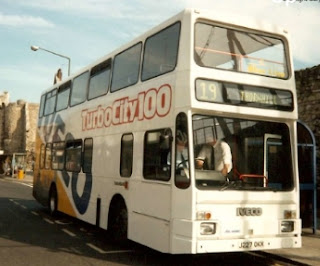 It was heavy, had steps up into the lower saloon and was not well received by those to whom it was demonstrated. It was also ugly and it was something of a surprise when it moved on to Filers of North Devon ... 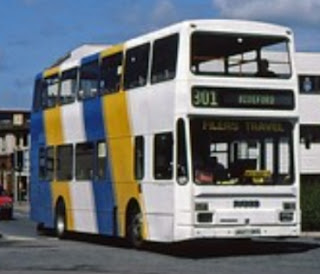 ... where it stayed until Filers withdrew from bus services (in 1998?). Next owner was Bluebird in Manchester ... 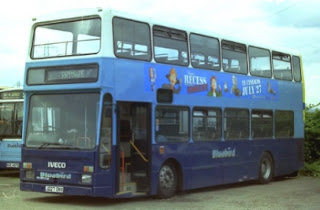 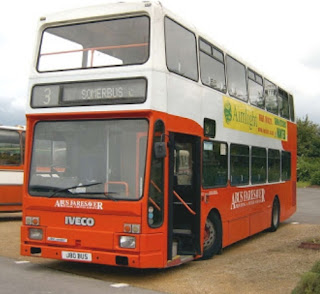 To Somerbus next, as on the blind in the picture above. It found its way to a couple of Wiltshire operators but was scrapped after an expensive breakdown. (Health Warning : no guarantees that this thumbnail vehicle history is (a) accurate or (b) complete; on line sources can be contradictory.)
Keith Shayshutt's book offers a full and accurate insight into the events that have been scrappily outlined above. If you want the whole truth and nothing but the truth, buy the book! You will find it fascinating and an excellent guide to the tortuous times of bus operation post deregulation.
It also brings back splendid memories for those who holidayed in the area.
First Bus hived off North Devon from the rump of Southern National and glued it on to Western National, with an equally remote HQ at Camborne.
Was that gap the cause of First's North Devon decline. Probably not, as Western National was rapidly becoming a First Bus basket case in its own right.
But our tale, and Keith's book, concludes tomorrow.
Next Good Read blog : Wednesday 14th October
Posted by fatbusbloke at 02:00