Again, an apology. fbb is battling with the new-look "Blogger" which is more complicated, less reliable, and harder to "ackle" than the old. Thanks a bunch, technologists, for making things more frustrating just to indulge your insatiable desire for fiddling with perfectly satisfactory software. And it automatically puts in paragraph breaks ...

Later, the graphics go where fbb wants them to go and NOT where Google dictates! But unpredictably. 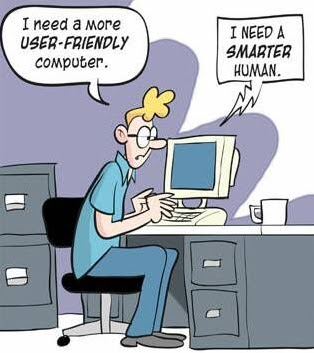 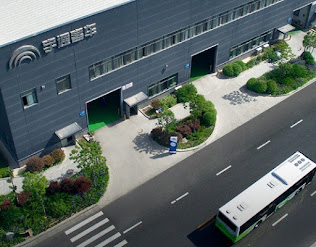 ... is the UK and Ireland importer and distributor for YUTONG Buses and Coaches. Based near Leeds, it is wholly owned by Pelican Engineering Co. Ltd which was established in 1919 and has traded continuously since that date. Pelican is a family business currently managed by the grandson of the founder.

Pelican Bus & Coach was established as part of the Pelican Engineering Group in 2012 when it took over the importership of BMC vehicles into the UK. With the demise of BMC, Pelican approached Yutong to see if they would enter the UK market and was delighted to be offered the role of importer in summer 2013.

BMC? It did have it prigins in the good old UK BMC, successors to Austin etc. and predecessors of British Leyland - but it became a Turkish producer of commercial vehicles ... 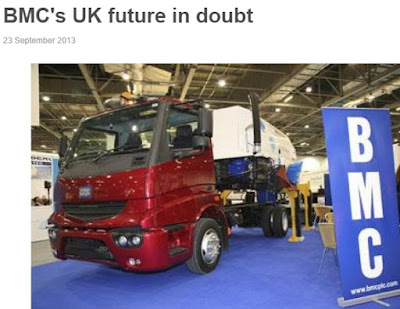 ... that became embroiled in Turkish internal politics.
Arriva has a Pelican Yutong electric bus as a demonstrator ... 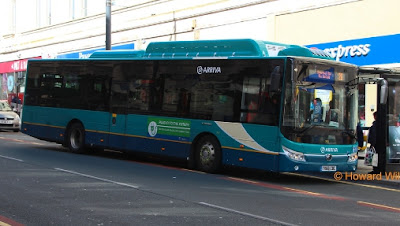 ... and First Leeds has one route so equipped. 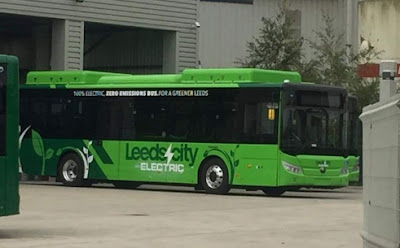 Service 5 appears as "Halton Moor Circular" which is something of a mis-representation.
At Halton Moor, there is a loop ... 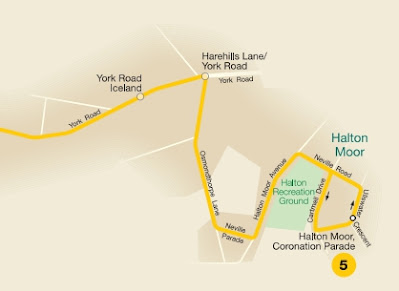 ... of no great extent, but a larger bubble appears in the city centre. 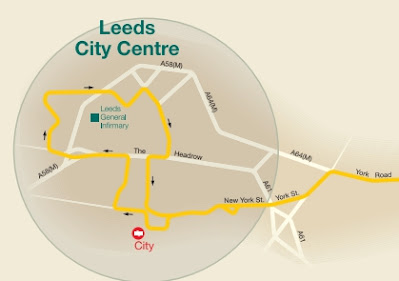 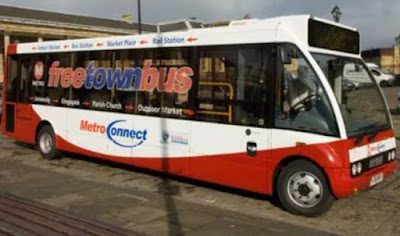 And the 5 does provide a "circular" service to/from the station and has been publicised as such by the PTE. 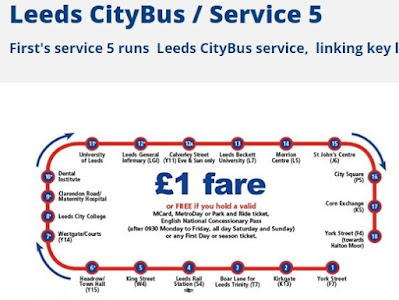 So, rather than showing the route from City to Halton Moor and back ...

... would it not have been better to show the timetable from Halton Moor via the city loop and back to Halton Moor.
The buses look good, however! 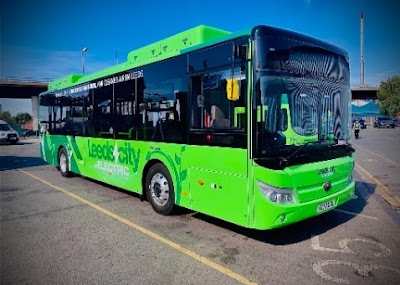 There is hardly any sign of First, just a large green Leeds City, nicely labelled ready to hand to whole lot back to the Council? Whoops - that is not planned!
Yet!
What Is He Doing? 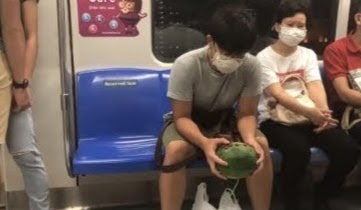 Isn't it obvious? He is playing computer games on a melon!
Hollow out the fruit, drill holes for the buttons ...

... in quite a small melon. Install a Raspberry Pi computer and a mini screen - job done.

The guy who made it (he's called Cedrick) is now seeking advice as to how to stop the melon from rotting.
How about replacing the melon with a plastic case?
Beauty And the Beast Bus
Sometimes a bus picture doesn't need to be about anything - it just needs to be a heart-warming image.
Here, via a Tweet, is Grant Palmer in rural Bedfordshire. 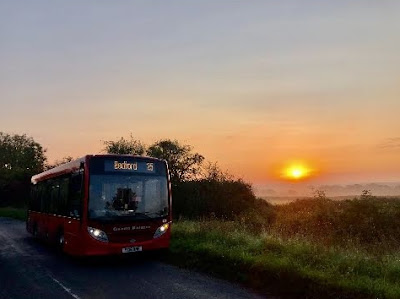 'Nuff said!
Petition Proposal
fbb has never ridden on the Bala Lake Railway although he has driven along the parallel road. It runs from Llanuwchllyn ... 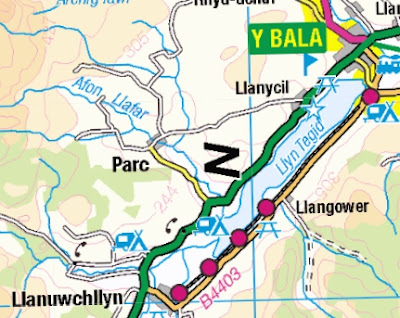 ... right along the south eastern bank of the lake ... 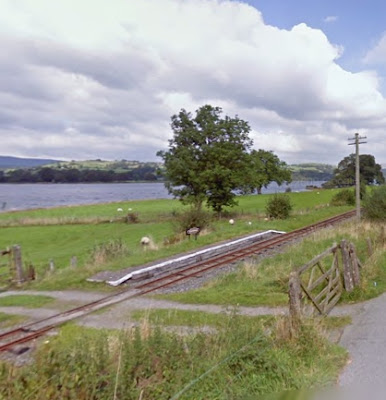 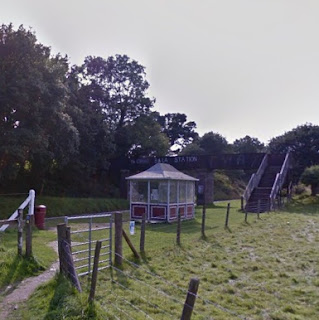 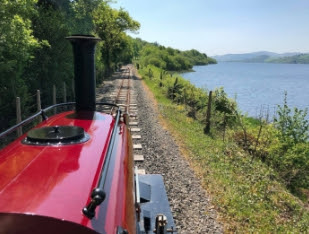 ... are, of course running along the trackbed of the former Great Western Railway to Barmouth which did have a station in the town. 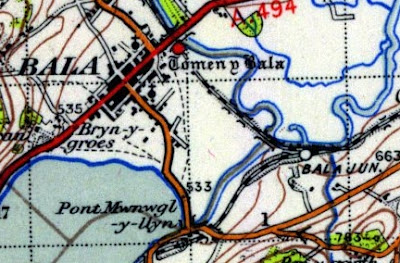 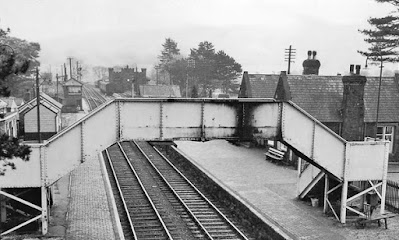 ... albeit on a branch of the branch that ran on to Blaenau Festiniog.
But the Bala Lake Railway people really would like a terminus in the town. Current proposals are shown on the map below ... 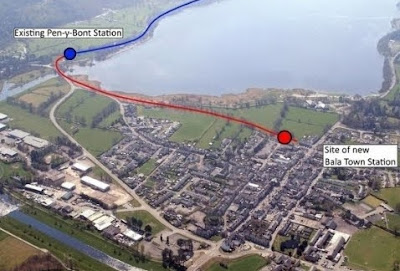 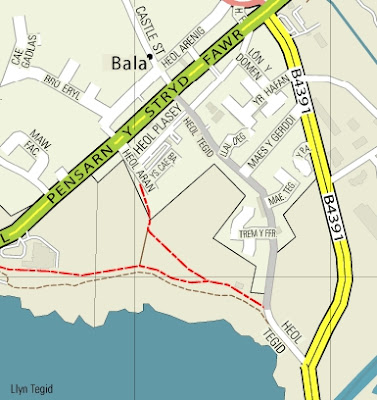 ... behind and beyond these new bungalows. 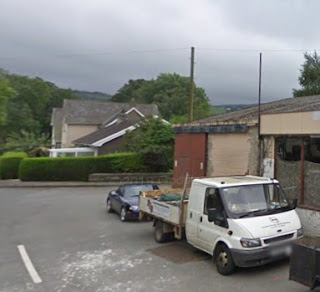 The project is to be supported by a petition, and those keen to support this project are invited to sign. Go to the Bala Lake Railway web site! (fbb cannot cope with trying to add a link to this blog - too frustrating. It used to be so very simple under the ancien r&eacute;gime - sorry!)
Next book review blog : Tuesday 22nd September
Posted by fatbusbloke at 02:00