GoTimetable : The Devil's in the Detail

The Demands of Dodgy Data

In the Bible, Daniel is trapped when his enemies persuade the King to issue an irrevocable decree.

So they went to the king and spoke to him about his royal decree: "Did you not publish a decree that during the next thirty days anyone who prays to any god or human being except to you, Your Majesty, would be thrown into the lions' den?" The king answered, "The decree stands; in accordance with the law of the Medes and Persians, which cannot be repealed."

Daniel ends up in the lion's den - and survives.

In the bus industry there appears to be an irrevocable law as well. It states:-

Once we put it on the computer it is up-to-date, reliable and just what the customer needs.

Except it often isn't. The output from back office computer systems often finds its way into public timetables; and it simply isn't good enough.

Nothing illustrates this better than Stagecoach service 25. From the Travel South Yorkshire (aka South Yorkshire PTE, hereinafter abbreviated TSY) map we can glean a few points of passenger interest. 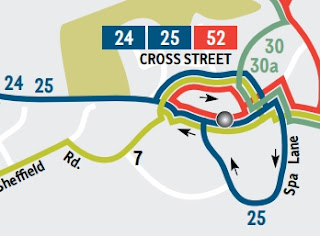 At Woodhouse (Cross Street being the official time point - or is it?) there is common ground with First Bus route 24 (both coloured DARK BLUE), but the 25 runs via Spa Lane (or does it?). The two routes then diverge significantly ... 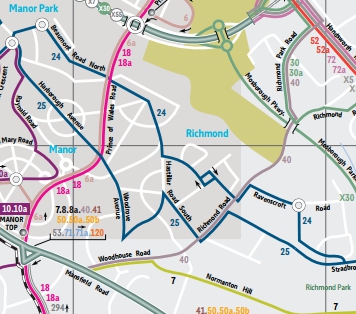 The routes merge at Manor Park and run together to Meadowhead. For non Sheffield residents that is from east of the City Centre to south. 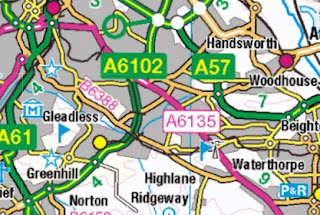 Meadowhead is the roundabout bottom left on the A61.

From here the services diverge again ... 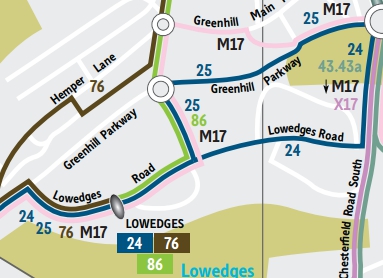 ... following different routes to Lowedges where they re-join in loving harmony. The joint route then leads to Old Mother Redcap (or does it?) ... 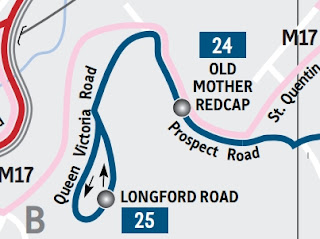 ... before the Stagecoach 25 strikes out to Longford Road (or does it?). Old Mother Redcap is a pub at Bradway Bank (not shown on map) where, in the good old days, buses showing "Bradway" on the blinds (which it never was) reversed into Wollaton Road. 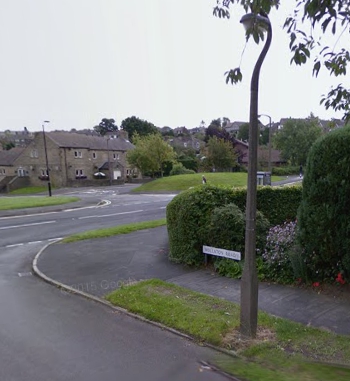 The picture is from Wollaton Road, looking across to the turning circle outside the pub. The Longford Road "loop" is further along Wollaton Road.

This confusing mixture of services was created (by consultants - who else?)  "to improve bus services for the people of Sheffield" as part of the Sheffield Bus Partnership changes in November 2015. And we all know what a huge success that was. In the text above, fbb had hinted darkly at some of the problems of this pair of cobbled-together routes.

For once, First's timetable is straightforward ... 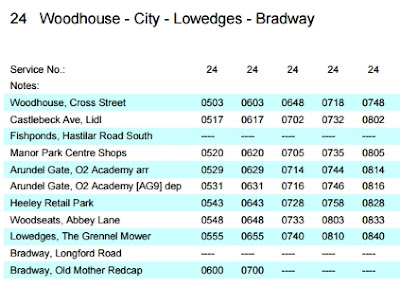 ... but it does reveal that 24s do not run to Old Mother Redcap all the time. Early morning and evening Monday to Saturday and all day Sunday you will find First 24a at the pub. For the rest of the time you need Stagecoach 25.

You may wonder why Fishponds Hastilar Road South and Bradway Longford Road are in the First list of time points when no buses go there.

And here is their timetable for buses from Woodhouse to Bradway (Bank).

Readers may, for the time being, quietly ignore the fact the Saturdays and Mondats to Fridays are all jumbled up. Oh, yes; X means "not on Bank Holidays.

This is extracted from their working timetable which is not published for the edification of passengers - thankfully - although the company often does upload its working timetables in the absence of anything better. And here are your "Mastermind" questions.

1. What time are the buses from Spa Lane (see map above)?
2. Why are there TWO time points at Woodhouse, only 3 minutes apart?
3. Where are the buses to Longford Road
4. Does this route run via Woodthorpe?
5. Which way does the bus go between Woodseats and Lowedges?
6. If this is "joint" with First 24 why is there a different "Manor Park"?
7. Ditto atWoodhouse?
8. Ditto at Woodseats?
9. Is Harborough Avenue the same as Centre Shops at Manor Park?

With the times for the opposite direction ....

10. What has happened to Old Mother Redcap?
11. What time are the buses from Longhford Road?
12. Which way does the bus go between Lowedges and Woodseats?
13. Does the bus go via Woodthorpe?
14. Where is Skelton Grove (see map - it isn't there)?
15. How is the ordinary member of the public ....

... expected to make sense of all this?

Of course, in steps Travel South Yorkshire to provide us with a timetable that merges the 24 and 25.

Here is an extract of the "from Woodhouse" table. 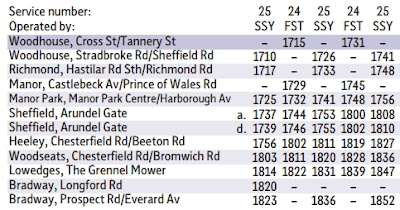 Apparently Stagecoach 25s don't run from Cross Street OR Tannery Street after all; Spa Lane and/or Skelton Grove times are a state secret; there is no mention of Strabroke or Woodthorpe and, look at the bottom ...

Only SOME 25s run to Longfotd Road. There is no service in the early mornings, evenings and all day Sundays. And when they do go there, they don't call at Everard Avenue or/and Old Mother Redcap until AFTER Longford Road.

In the Other direction ... 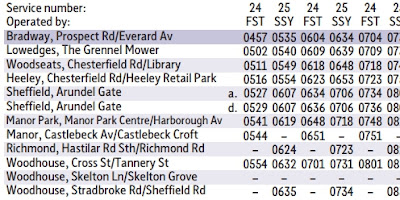 As fbb wrote above:-

So that's the sort of thing that GoTimetable Sheffield has to sort out. 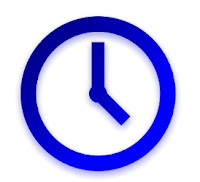 How's this for a jolly tale (?) from Bristol yesterday.

Most buses were free in Bristol today (Monday) after the ticket machines on First buses stopped working on a morning of absolute chaos for the firm.

It is the first day of First's new timetables, but the company's on-bus GPS systems crashed, buses followed old timetables and routes, and the firm's entire computer system stopped working. This meant none of the bus stop 'next bus' electronic signs worked, buses failed to turn up, the new timetables were not adhered to and the firm was deluged with complaints from confused and irate commuters.

There was good news for thousands of passengers though – with ticket machines out of action on the buses, drivers just waved passengers on without collecting any money.