... Where No Passenger Has Been Before 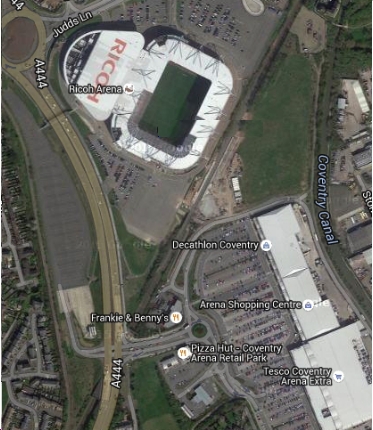 The Ricoh Arena, home of Coventry City footy club; the Sky Blues of the late great Jimmy Hill fame. And nearby (bottom right) a Tesco Extra, the Arena Shopping Centre and oodles of parking for motor cars. There is even a Frankie and Benny catering establishment. What more could you want for a post-festive farrago of football, fast food and ferapy of the retail kind?

And slashing through the middle of it all is the railway line running between Coventry and Nuneaton. Surely an ideal place for a station which, as well as generating extra revenue for London Midland, might relieve some pressure on the oft-beleaguered A444.

This leaflet is to tell you about major improvements that are planned for the Coventry-Nuneaton rail corridor:
• Two completely new stations – at Coventry Arena and Bermuda Park
• More platforms at Coventry main station, to accommodate six-car trains
• Longer platforms at Bedworth station to accommodate longer trains
• Improvements to the train service, with frequency doubled to every thirty minutes
• Passenger capacity raised to four times its current level
• Equipment at the new Coventry Arena station to turn trains around for an events shuttle service. 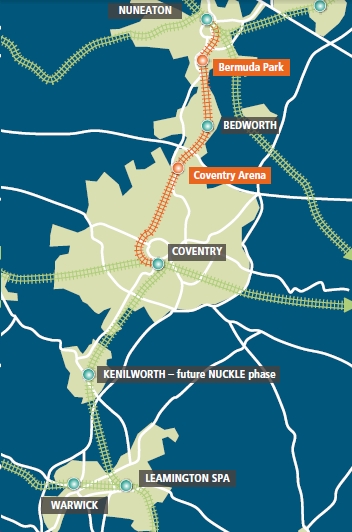 ... which hints at the extension of the service to Leamington Spa via a new station at Kenilworth.

All super good news for the residents of Lady Godiva's one-time home. So, says everyone, lets get the JCBs out and get a-building.

But exactly where is the Ricoh Arena? 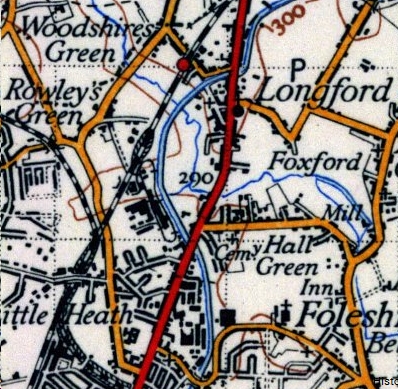 The 1930s map extract shows Longford and Exhall station, the red dot on Woodshires Road (it closed in 1939) ... 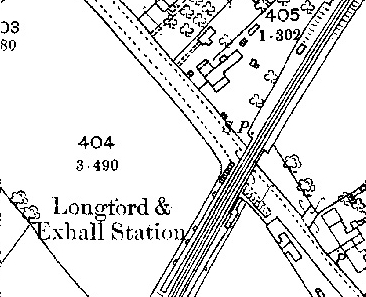 ... with the A444 striking north to Nuneaton. A modern map extract shows how much has changed today! 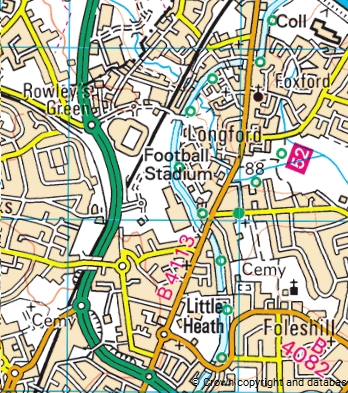 And if Exhall has a familiar ring about it, you are right. It is the salubrious site of Shearings interchange facility, loved by many a coaching holidaymaker. Here, for brief but frenetic periods of activity, Shearings coaches iinterchange allowing complex inter-holiday coach jouneys. "Will Mr Herbert Thring, booked on holiday AC2345/B/29G please hurry to gate 345B where his coach to Wigan and the Industrial North West is waiting." Such fun!

September 2013 : Nothing has happened due to uncertainty about the future of Coventry City at the arena. Estimated opening date now Summer 2015.

Following a protracted rent dispute between Coventry City and ACL (owners of the arena), the football club left the Ricoh in 2013, playing home matches at Sixfields Stadium in Northampton for over a year before returning to the Ricoh in September 2014. Within two months, both shareholders in ACL were bought out by rugby union Premiership club Wasps, who relocated to the stadium from their previous ground, Adams Park in High Wycombe. Wasps' first home match in Coventry was on 21 December 2014 against London Irish.

Wasps Rugby Club owning the home of the Sky Blues. There's a sting in the tail. (Groan).

Good to have decisive and timely project management, eh?

September 2015 : No date yet announced for the opening

Now then chaps and chapesses; Festina Lente (as they say), don't rush. Take your time. Chillax. It's only a railway station, after all.

And, although complete (we assume), the station is STILL not open.

With all this in mind, our Northampton Correspondent went to have a look. It is his report(s) that form the basis of tomorrow's blog.

And this lavish ferroequinological opulence is what has taken all that time to not be open. 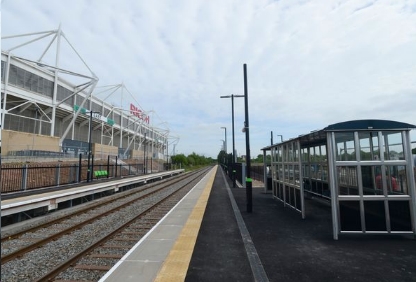 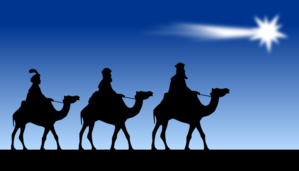 We three kings of Orient are
Bearing gifts we traverse afar
Field and fountain, moor and mountain
Following yonder star

Well, nearly. They weren't kings and we have no idea how many there were. Matthew records the story in his Gospel.

Jesus was born in the town of Bethlehem in Judea, during the time when Herod was king. Soon afterward, some men who studied the stars came from the East to Jerusalem and asked, “Where is the baby born to be the king of the Jews? We saw his star when it came up in the east, and we have come to worship him.”

They were magi. A Magus was a sort of court astrologer and astronomer (the two were not distinct back then) who would advise their boss who might have been a King of Iraq. They had been following their star maps ... 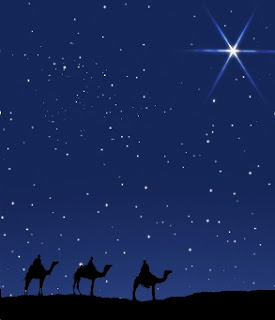 ... as they travelled on horseback. Camels were not ridden back then!

Wikipedia gives a long list of explanations for "the Star". 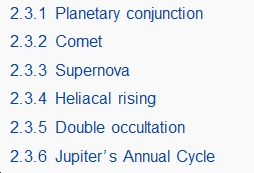 But why bother? This star is God's business and, like it or not, if He is God he can do just what he likes with stars, sky and anything you like.

So, after a brief confab with Herod, they went on; and not to the stable/cave/cattleshed etc.

It's what they did next that matters.

Next "Arena" blog : Wednesday 30th December
Posted by fatbusbloke at 02:00